VERSAILLES—Palace of the SUN KING in the ERA of RADIANCE

VERSAILLES—Palace of the SUN KING in the ERA of RADIANCE 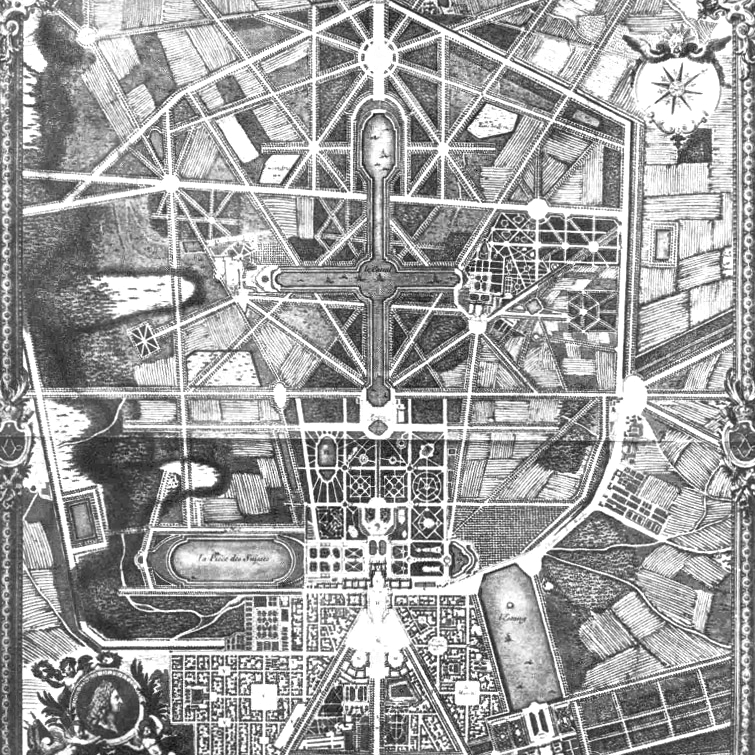 Versailles—the grand palace and gardens started by Louis XIV, King of France—was built in the 17th century during the Age of Enlightenment. It is about 12 miles west-southwest of Paris. The architectural portion of the complex took 21 years to complete with construction starting in 1661 when only a hunting lodge stood on the wooded site. Work on the elaborate gardens and waterworks on the west side of the chateau lasted for roughly forty years. Twenty-thousand family members, close friends, courtiers, servants, and soldiers lived there at the pinnacle of its opulence. However, this concentration of ostentatious wealth, exquisite beauty, and absolute power ultimately led to the French Revolution.

The Palace at Versailles

The buildings, with their 700 rooms, could not be more orthogonal; almost all of them are rigidly rectangular. The extensive gardens, however, are one of the most iconic and extensive representations of diagonality in landscape design ever built…and may remain so forever. The gardens were designed and installed over a period of many years by the great landscape architect and gardener Andre Le Nôtre, also known as Le Nostre. What is seen while moving through the gardens, but is not seen just looking at the plan, are the architectural and artistic features that attract the eye, and surprise the visitor, features that make the plan with many of its angular, seemingly whimsically placed pathways appear to be randomly situated.  It is that array of pathways, looking almost like a tabletop full of tossed pick-up-sticks, that makes Versailles such a powerful emblem and antecedent of Diagonality in the Modern Era. 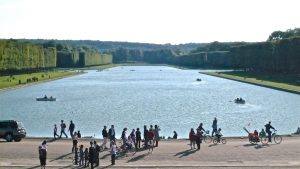 Cross axis of the Grand Canal

Louis XIV was not a modest ruler. He called himself the Sun King and his assertive declaration of absolute power was embodied in his utterance I am the State. To demonstrate what he viewed as his infinite powers that extend to the heavens and perhaps, he thought, even emanate from the cosmos, he had the palace and the gardens positioned along an East/West axis so the sun would rise on the entrance to the palace and set on him and his grand domain at the end of the day. This site planning strategy echoes the cosmic aspirations of Pharaonic Egypt, where many temples and pyramids also aligned with the axis of the sun’s path across the sky. However, this King of France preferred an allusion not to ancient Egypt, but to the Greek God Apollo.

An incipient developmental stage of the east/west landscape theme actually existed on the site before Louis XIV got involved, but it was Le Nôtre who developed and amplified the scheme into a grand and emotionally withering spectacle before the King relocated the seat of government from Paris. A very modest expression of diagonality had a forerunner, so to speak, at this location when the first Versailles of 1624 was built by Louis XIII. That king’s hunting lodge was surrounded by a dry moat whose shape followed the arrowhead, non-orthogonal features embodied in many fortifications of that era. 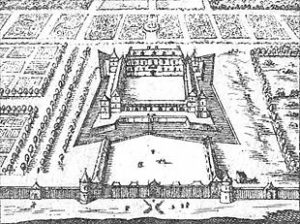 In his informative book Gardens of Illusion—The Genius of André le Nostre, F. Hamilton Hazlehurst describes how important landscape design was in seventeenth-century France. “…[it] was as important an art form as architecture, sculpture, and painting.” Hazelhurst goes on to say, “This was a period when the practitioners of gardening were also theorists, eager to commit their thoughts to paper.  There were important treatises, such as Jacques Boyceau’s Traité du jardinage selon les raisons de la nature et de l’art, emphasizing not only the practical aspects of gardening but the aesthetic values as well.  As a result, the basic principles that were to govern landscape architecture through the century had already been laid down when André Le Nostre came upon the scene. But it was for this genius, in his capacity as gardener to the King, to bring landscape design as an art form to a position of unparalleled importance in the life and culture of the age.”

During the period that Versailles was designed, there was intense study into the art of perspective and the science of optics. As Hazelhurst writes on page vii of his introduction to Gardens of Illusion, “One of the most fascinating aspects of French landscape architecture by Le Nostre was his use of optical illusion to give life to his gardens.  This was probably the direct result of his study of Père Jean-Françoise Niceron’s La perspective curieuse and similar treatises on optics that appeared in the important formative years of his development.  The methods of creating optical influences, carefully described in these treatises, were soon applied to garden architecture.  Surprisingly this aspect of Le Nostre’s work has long been overlooked . . . . . .”

The study and employment of perspective in paintings and drawings continued during this period from its start during the Renaissance. Le Notre was himself a student of perspective at the Lourvre, having been born in 1613 into a family of gardeners. The term perspectiva is separate from perspective. The former deals with the subject of optics, which deals with how light carries information from the object perceived to the observer. It also deals with how light is processed in the eye and then in the brain. It is a complex area of investigation that no doubt fascinated Le Notre who was a highly educated and curious man. As Hazelhurst mentions on page 2 of Gardens of Illusion, “Le Nostre’s education in painting and architecture, which was probably of a highly academic order, must have been supplemented by the reading of literary treatises on optics that began to appear in France in the 1630s. Certainly, the rules he learned from the writings of Père Niceron and similar sources were later to contribute to the unique quality of his landscape architecture. “

When one looks at the site plan of Versailles just as a work of graphics, one can imagine light sources positioned where paths radiate out in various directions like rays of light. In fact, radiation is almost a hidden sub-theme in the gardens of Versailles. The seventeenth century was a period during which light was studied from many points of view. During this period, the practical science of optics was advanced significantly. Microscopes and telescopes were invented around the start of the 17th century. This led to microscopic geometrical structures (organic and inorganic) being enlarged and better appreciated. Using newly developed telescopes, radiating points of light in the heavens were seemingly brought closer. Galileo improved his refracting telescope in 1610 and one year later Johannes Kepler presented an approximate mathematical analysis of the focusing properties of lenses. In 1621 the Dutch astronomer Willebrord Snell discovered the mathematical relationship between angles of incidence and transmission for a light ray refracting through an interface between two media. 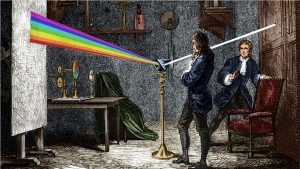 When work on Versailles was underway, the French mathematician Pierre de Fermat presented his principle of least time, assessing that light follows the path of minimum time in traveling from one point to another. In 1676 the Danish astronomer Ole Rømer deduced the approximate speed of light, signifying that the speed of light was not infinitely fast. Also during this era of curiosity, two competing models dealing with the nature of light were advanced—that of fast-moving particles n one hand and as propagating waves on the other. Scientists such as Descartes, Hooke, Huygens, and Newton were also involved in this exciting exploration of the medium that gives us vision and information about the world in which we live. How could such an era, dominated by discoveries in this mysterious and fascinating mode of communication (light), not be reflected in the design of the most ambitious landscape design project of the times? 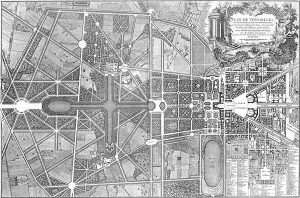 Why, it must be asked, were the buildings at Versailles dominated strictly by the right angle, while diagonals feature so prominently in the gardens. The answer is complex and multifaceted. Most obviously, it is much easier to shape a path, flower bed, or carriage cart along angular lines than it is to frame the supporting structure of a room or complex of rooms, as in a palace. Even if pains had been taken to create non-orthogonal rooms, to decorate those rooms with asymmetrical, polygonal shapes and forms, would have multiplied the effort considerably. Even with the deep pockets of a despot, there are limits to time and money.

It is important to note that many of Le Nostre’s diagonal allees, particularly when they occur in the etoile form within a rectangle that the radiating lines oftentimes go not to the corner of the rectangle but off to one side or the other. Moreover, the distance each allee strays from each of the four corners varies, as in the plan of the “Chateau de Bonne”, drawn by Le Nostre himself.  The reason for this asymmetry is that radiating allees are headed not for the corners of the parterres but for statues or other garden features which occur centered in geometric shapes occurring in other pathways or waterways, or headed for a building corner or the corner of a perimeter garden wall. The conclusion one must reach is that the visual axis experienced takes precedence over the geometric regularities of the plan view.  What is actually seen takes priority over what is drawn.

Who was Le Notre? He was a lovable genius, wealthy, generous, trusting, a great collector of art, humble with sophisticated tastes, disarmingly direct, expressed warm enthusiasm, and was generally uninhibited.  He was also ingenious, had a buoyant sense of humor, great powers of observation, was quick and lively, and even in old age was remembered by Louis de Bachaumont as the “most pleasant old gentleman that perhaps ever existed, a person with an ever-cheerful countenance who was always jovial, correct, and well dressed.”(Quoted words are those of Bachaumont from p.8 of Illusions)   “…he maintained a noble simplicity all his life.” (Hazlehurst p. 6 next to the last paragraph)  He was used to embracing those who praised his master, King Louis XIV, as well as embracing the rather aloof King himself upon the King’s return from some campaign. On one occasion he even slapped the Pope on the shoulder during an audience, charmed by the Pope’s comments.

One of the first buildings and garden features at Versailles was the Menagerie, which was not designed by Le Notre but by architect Louis Le Vau (1612-1670). It is situated at the southern end of the cross arm of the Grand Canal and construction was begun in 1664. Of interest to our theme of Diagonality is the fact that the two-story pavilion at the center of the Menagerie is octagonal in plan sitting in an octagonal fenced courtyard created for walking in a “circular” path to view the animals. The octagon was frequently used at the time as the plan shape of many dovecotes, particularly in England. A viewing balcony wraps around the building at the second-floor level providing views of the collected exotic animals. Seven wedge-shaped garden enclosures fan out from the courtyard accessed by iron gates. At the end of each wedge was a barn or stable to house the animals. On the eight side is an aviary. When Versailles fell on hard times during the French Revolution the zoo animals were freed and or slaughtered and the buildings auctioned off and dismantled. However, before being dismantled, the Menagerie at Versailles, the first such zoo building constructed according to the Baroque style, became a model for menageries throughout Europe 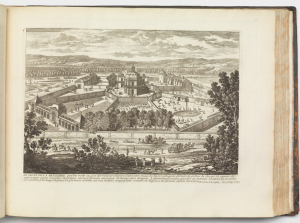 The menagerie at Versailles.  Marquand Library of Art and Archaeology, Princeton University