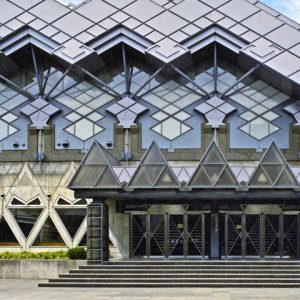 For many people, Diagonality is an off-putting word, sounding initially more complex and abstruse than it really is.  Some people even stumble trying to pronounce the unfamiliar, six syllable word.  And yet, once the basic concept is understood, the word Diagonality is comfortably embraced as an on-the-mark, turn-to-expression referring to a design motif that is both pervasive and culturally significant.  Countless examples of Diagonality can be seen around the world in art museums and on street corners once the idea takes hold in the mind,  and the eye is cued to see.  As the German poet, philosopher and scientist Goethe (1749-1832), once observed, “We see what we know.” Based on my understanding of perception and the many conversations with friends and design professionals I’ve had over the years, the obverse is also true: we are blind to things/concepts that have not yet taken residence in the mind.  Whether one has learned to see the phenomenon of diagonality in all it’s manifestations, those who have actually employed the diagonal motif, consciously or unconsciously, know it offers a productive and liberating approach to problem solving in form, pattern, and structure.

Diagonality permeates design disciplines other than architecture.  These include the visual arts, landscape and urban design, product design, and structural engineering.  Its history takes us from the familiar geometry of the right angle to a geometry that is more complex and mysterious, and in many instances, more advantageous.  Manifestations of Diagonality appear in the street layout of cities, in the structural framing of bridges and high-rise buildings, in man-made landscapes, and in furniture design.  In my treatment of the subject, the connective tissue that unifies seemingly separate and distinct artistic styles and technological developments such as Cubism, Rayonism, Futurism, Art Deco, geodesic domes, space frames, and Deconstruction are being studied.  This new concept of Diagonality weaves together design trends and developments that in many respects were hitherto regarded as unrelated or loosely related.

The right angle has dominated structural, decorative and spatial motifs since the beginning of recorded history, particularly in architecture.  As the 19th century ended and the 20th century began, Diagonality flashed onto the cultural landscape with dramatic vitality.  When the benefits of this powerfully enabling geometry were discovered, it became a lasting addition to the sourcebook of architectural, design, and engineering forms.  The phenomenon of Diagonality has permanently changed the course of art and architecture and promises to do so into the foreseeable future.

For the second half of the 20th century, Diagonality was the architectural motif de rigueur; it appeared (and continues to appear) in important buildings and engineering structures worldwide.  However, the term Diagonality is rarely employed in professional books and journals.  How was it possible that such a transformative geometric motif could have emerged in such a ‘voiceless’ manner?  Due to the fact that diagonals and other angular relationships continue to find bold expression in the 21st century with increasing vigor and conceptual daring, it seems appropriate now to codify this phenomenon, beginning with antecedents in ancient Egypt and then tracing its evolutionary development through succeeding cultures and later centuries.

The goal of THE CENTER FOR THE STUDY OF DIAGONALITY IN WORLD CULTURE is to probe the impact of Diagonality on contemporary culture and reciprocally, the impact of the culture on the phenomenon.  The Theory of Diagonality unites disparate movements usually associated separately with early 20th century design directions as mentioned above.  Our CENTER intends to weave together these and other movements, as well as subjects as diverse as cognition, religion, science, mathematics, cosmology, military fortifications, and perhaps most provocatively, social revolution—weaving them into a broad conceptual structure under one morphological umbrella that illuminates the geometric foundations of the built environment.

Architects around the world are generously providing photographs and plans of their work along with constructive comments about the thesis.  Their encouragement and interest in this as yet unexplored topic suggests THE CENTER FOR THE STUDY OF DIAGONALITY IN WORLD CULTURE will attract a broad global audience from many diverse fields of inquiry.  We welcome your interest and possible engagement.