Tower of the Winds

Tower of the Winds 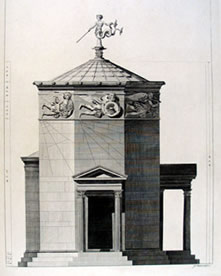 The Tower of the Winds was built in 48 BCE in the Roman Agora in Athens, Greece but was largely out of view for many centuries being almost wholly buried under the accumulating debris of changing civilizations.  It was unearthed in 1837 and 1845 by the Greek Archaeological Society.

Its significance regarding diagonality is that it is one of the earliest buildings ever to have employed an octagonal footprint.  In part due to the Tower of the Winds, the octagon became one of the most influential and frequently used non-orthogonal shapes in the history of architecture. 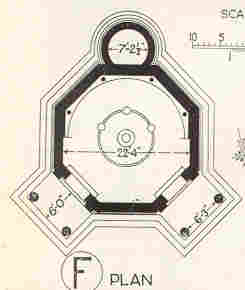 Frank Lloyd Wright’s use of the octagon in his early works at the end of the 19th century played a critical role in ushering in the Age of Diagonality at the beginning of the 20th century.

The Tower of the Winds was constructed by the Greek astronomer Andronicus of Kyrrhos, or, as some writers have it, Andronikos Cyrrhestes, or as a translator of the great Roman architect, Vitruvius, spelled it (and as today’s Encyclopedia Britannica spells it), Andronicus of Cyrrhus. 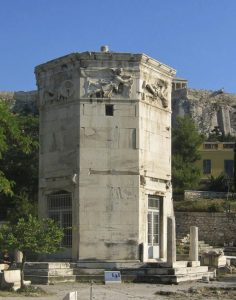 Now unearthed, the building is a remarkable and handsome structure that sits on a stylobate three steps high.  On the Northeast and Northwest sides are (were) porticoes with fluted Corinthian columns 13’ – 6” high.  A circular chamber projects from the South side and was probably used as a reservoir to supply water for internal functions.  Twenty-four blocks of marble form the roof and the external wall of the tower is plain for a height of 29 feet with the exception of incised lines that form a part of the sundial. 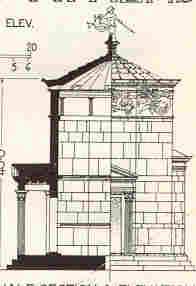 The tower was built to identify the direction of the wind using a weathervane and to measure the passage of time both by a water device and by a sun-dial. The building has a band course or frieze of bas-reliefs near the top of the tower representing the several winds, each relief facing the direction from which the wind blows (i.e. the cardinal and inter-cardinal points).   On top of the tower is a conical shaped piece of marble that was surmounted by a weathervane in the form of a bronze Triton holding in his right hand a rod.  Just as the direction of the wind is today an important piece of information for weather forecasting, air travel, and space flight launches, so too, knowing the direction of the wind in ancient times was vitally important for reasons of health…as the quote from the great Roman writer Vitruvius below will reveal.

According to Vitruvius, the weathervane was designed to rotate with the wind stopping the sculpture to face into the prevailing wind. The pointing rod would then be positioned directly over the bas-relief identifying the specific wind that was blowing. 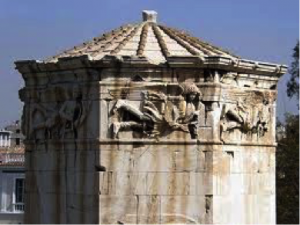 In Chapter VI of Vitruvius’s Ten Books of Architecture entitled The Directions of the Streets; with Remarks on the Winds, Vitruvius goes into detail regarding the reasons for the construction of the Tower of the Winds. He begins with an expression of concern for the proper orientation of streets within a town whose fortification walls have already been constructed. He states that “cold winds are disagreeable, hot winds enervating, moist winds unhealthy.”     He gives the example of a town called Mytilene on the island of Lesbos which he describes as having been built with magnificence and good taste but “when the wind is south, the people fall ill; when it is northwest, it sets them coughing; with a north wind they do indeed recover but cannot stand about in the alleys and streets, owing to the severe cold.”

“By shutting out the winds from our dwellings, therefore, we shall not only make the place healthful for people who are well, but also in the case of diseases due perhaps to unfavorable situations elsewhere, the patients, who in other healthy places might be cured by a different form of treatment, will here be more quickly cured by the mildness that comes from the shutting out of the winds. The diseases which are hard to cure in neighborhoods such as those to which I have referred above are catarrh, hoarseness, coughs, pleurisy, consumption, spitting of blood, and all others that are cured not by lowering the system but by building it up. They are hard to cure, first, because they are originally due to chills; secondly, because the patient’s system being already exhausted by disease, the air there, which is in constant agitation owing to winds and therefore deteriorated, takes all the sap of life out of their diseased bodies and leaves them more meagre every day. On the other hand, a mild, thick air, without draughts and not constantly blowing back and forth, builds up their frames by its unwavering steadiness, and so strengthens and restores people who are afflicted with these diseases.

Then let the directions of your streets and alleys be laid down on the lines of division between the quarters of two winds.

The Tower of the Winds was built roughly 240 years after the famous lighthouse called Pharos was erected in Alexandria, Egypt. Given the prominent place that Pharos had in the architectural and cultural psyche of the peoples of the Mediterranean, it seems very likely that Pharos, and particularly its diminutive model in nearby Abusir, Egypt influenced the octagonal geometry of The Tower of The Winds.  Both were structures that served utilitarian purposes and both were products of the Greek mind.  Both reflected an omni-directional orientation, not an Egyptian axial orientation. Both took a figure from plane geometry and extruded it into three-dimensional form. The break from right angle architecture had begun. 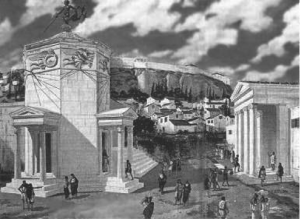 Thomas Jefferson had a copy of James Stuart and Nicolas Revett’s 1762 book The Antiquities of Athens, which contain exquisite drawings of the tower in its presumed virgin state.  Jefferson was not alone in being wowed by the images of these ancient buildings; this book and others produced by several other antiquity investigators were highly sought after and very influential in furthering the interest in neoclassical architecture during the Age of Enlightenment and in promulgating interest and use of the octagon as a geometric plan motif.

The architecture of the Tower of the Winds has been copied time after time throughout history.  The design of the 18th century Radcliffe Observatory in Oxford UK, the 15th century Torre del Marzocco in Livorno Italy, the Temple of the Winds in Mount Stewart in Northern Ireland and the tower in Sevastopol Ukraine built in 1849 have followed the exemplary design of Tower of Winds.  Most recently, A Tower of the Winds was replicated in Central Kentucky (USA) by Clay Lancaster (1917-2000) on his Warwick Estate. 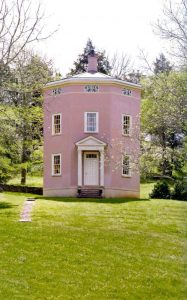 All these replicas may not on the surface seem like such an important development save for the fact that the octagon became over time one of the most influential and frequently used non-orthogonal shapes in the history of architecture.