THE WRECK OF HOPE

THE WRECK OF HOPE 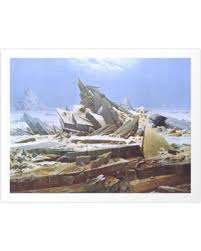 During the first quarter of the nineteenth century, a striking and memorable oil painting portraying a jagged mountain of ice in the North Sea was executed by the great German Romantic Era artist Caspar David Friedrich (1774-1840). The painting called The Wreck of Hope (the early 1820s) was inspired by Admiral William Parry’s search for a route to Asia through the North Pole. The work is one of the finest pre-modern paintings to capture the spirit, energy, and very corpus of Diagonality. In that sense, the painting foreshadowed the angular geometric motif that was to alter the essence of art and culture that emerged at the very start of the twentieth century. 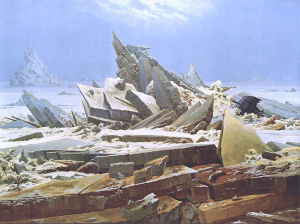 The Wreck of Hope (known earlier as Das Eismeer or The Sea of Ice) is described in Wikipedia as a shipwreck in the “middle of a broken ice-sheet, whose shards have piled up after the impact.” Horizontal slabs of ice looking like they are made of stone appear at the bottom of the painting, but they rise inexorably in crisscrossing jagged shards creating an almost religiously spirited composition. The pile of ice sheets looks like they are reaching for a trace of sunlight emanating from a thin scattering of clouds above the icy pyramidal mass below. An almost invisible trace of the doomed ship’s mast slants up at a low angle through the ice and culminates in a threatening, dart-shaped pinnacle.

The Wreck of Hope was not the only painting in which Friedrich employed a dramatic diagonal motif. Diagonals were a compositional feature that ran through many of his major paintings and also through his extensive oil studies of ice floes on the river Elbe, near Dresden. Friedrich’s Wanderer above the Sea of Fog is a painting with diagonal compositional elements and triangular massing that focus on a centrally positioned man, seen from behind, contemplating the harsh consequences of a cold and turbulent seascape. 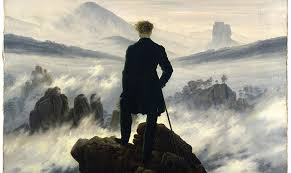 The artist’s Cross in the Mountains (today known as the Tetschen Altar) is another pyramidal composition with widening rays of the evening sun spreading out radially in the sky at the top of the painting. Rays of sunlight are a familiar motif in twentieth-century works executed during the Constructivist and Art Deco eras.  Friedrich’s Two Men Contemplating the Moon is yet another painting with a diagonal motif: this one is an inverted pyramid formed by the slope of the land and a steeply sloping old tree.  The French sculptor David d’Angers, deeply impressed by this work in 1834, wrote “He (Friedrich) has understood completely how to represent in landscape the great struggles of nature.” 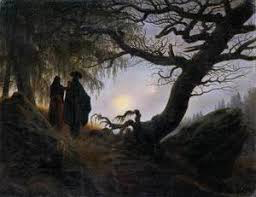 Caspar David Friedrich was generally considered the most important German artist of his generation. His ideas for paintings often came to him in dreams. The dream for the Wreck of the Hope was likely motivated by an incident in his youth (age 13) when his younger brother Christoph reportedly saved Caspar from falling through the ice of a frozen lake and in turn lost his own life in the rescue. It has been postulated that all of Friedrich’s “sea of ice” paintings were emotionally driven by this deeply traumatic event that occurred in 1787. This could explain Friedrich’s best-known remark, perhaps also motivated by his reported frequent periods of depression, in which he advises the artist “to close your bodily eye so that you may see your picture first with the spiritual eye. Then bring to the light of day that which you have seen in the darkness so that it may react upon others from the outside inwards.”

The Wreck of Hope was first shown in 1824 with the title An Idealized Scene of an Arctic Sea (with a) Wrecked Ship on the Heaped Masses of Ice. A piece of the dark stern of the ship is visible to the right of the pyramid of ice in the center of the painting. The stern bears the inscription HMS Griper, which is the name of one of two ships that Parry had jointly commanded. Actually, Parry’s expedition never resulted in the loss of a ship even though that catastrophe was fictionalized in Friedrich’s painting.

The Wreck of Hope was seen at the time as too radical in composition and too harsh in subject matter, with its icy palette, fearsome monumentality, grim subject matter, and dramatic intensity. Given its rejection, it went unsold until after Friedrich’s death in 1840. It was well before this date that the artist fell from favor in the art world and died lonely in obscurity, ill health, and poverty. However, Friedrich’s artistic vision rose from the fickle ashes of art history both in later nineteenth-century polar paintings by other artists and at the start of the twentieth century when the global phenomenon of Diagonality was just coming to the fore. Thirty-two of his paintings were exhibited in Berlin in 1906 and fifteen years later, in the 1920s, the Expressionists discovered his work and were influenced by it.  Another resurgence of interest in his work occurred in the early 1930s with the rise of Nazism, but this was followed soon thereafter by a sharp decline in his popularity due to the association of his work with the Nazi cause. Finally, Friedrich’s work regained its popularity when the phenomenon of Diagonality again rose robustly in world culture in the late 1970s. 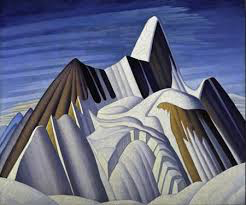 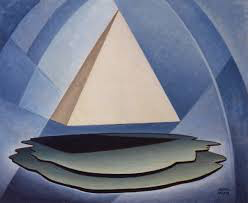 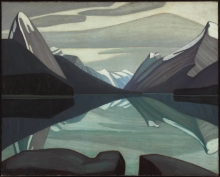 Twentieth-century Canadian artists Lawren Harris and Paul Nash were moved and inspired by Friedrich’s The Wreck of Hope. This connection is noteworthy because Harris built a house in Toronto with many diagonal features. The angular architectural scheme with its chamfered corners echoes the geometry evident in his many paintings. 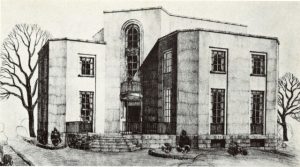 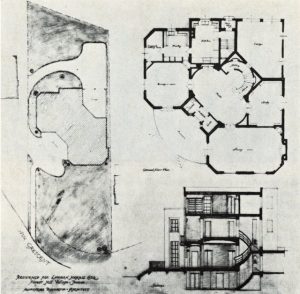 Although Harris went to Stuttgart in 1930 to see examples of modern architecture, he hired Russian-born Canadian architect Alexandra Biriukova to complete the design of his Art Deco style house in the Forest Hill section of the city. The design was initially worked on in the office of Douglas Kertland, a then-young architect who had endorsed Biriukova’s application to practice architecture. Her name is on the construction documents where she is identified as the architect, but the documents were signed by Kertland, suggesting she was the actual designer. Who did what in that firm and who should be credited for the design will probably never be known. The current owner of the house, an interior designer, has said the Art Deco design with its angled walls better caught the light for Harris’s paintings but it is not clear whether this was Harris’s idea, the decorator’s interpretation, or the design intent of the two architects who worked on the drawings. 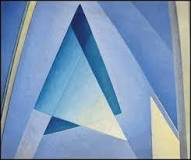 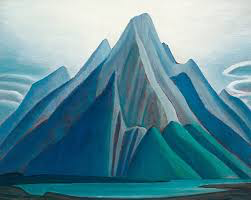 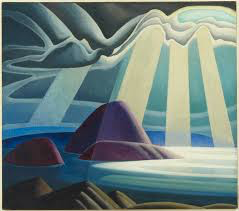 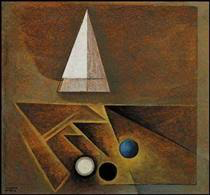 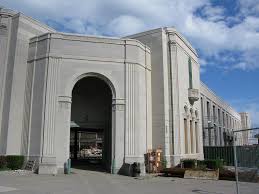 Nevertheless, Biriukova was credited with the design when the house plans were published in Canadian Homes and Gardens, April 1931. The Harris house is believed to be the only project she ever designed in Toronto, a design deemed too radical at the time for conservative Toronto. It is likely that the Depression dried up all architectural commissions and because of the poor reception to her design, she left the profession and became a nurse.

The Wreck of Hope has resonated deeply with other modern artists such as Anish Kapoor and Mark Rothko but more for aesthetic and philosophical reasons than geometric reasons. However, for modern architects during the Age of Diagonality, the dramatic use of diagonals portraying sheets of ice thrust up out of the sea appears to have affected several twentieth-century architects such as Thom Mayne. 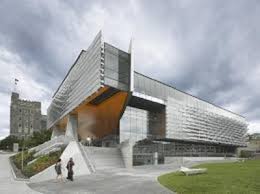 Mayne, known for his highly diagonalized building designs, regards Friedrich’s ice painting as a primary influence (an antecedent of sorts) impacting more directly his approach to the dynamic relationship between architecture, landscape, and nature. Another work of art derived directly from Friedrich’s painting is Guy Laramée’s 2006 THE WRECK OF HOPE: TRIBUTE TO CASPAR FRIEDRICH, a 3-d facsimile of Friedrich’s painting. Laramée’s lighted work was created out of glass, silicone, and wood in a 45-gallon oil barrel. 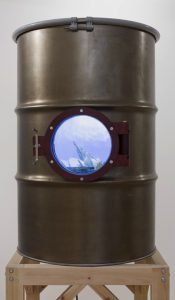 Guy Laramée’s 2006 THE THE WRECK OF HOPE: TRIBUTE TO CASPAR FRIEDRICH 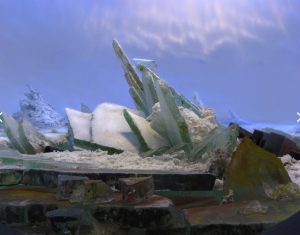 Guy Laramée’s 2006 THE WRECK OF HOPE: TRIBUTE TO CASPAR FRIEDRICH

There were other developments related to Diagonality during the nineteenth-century that will be explored in the pages that follow: origami art, dart-shaped fortifications and fortresses, triangular floor plans and pyramids in architecture, a new treatise on perspective, city plans featuring diagonal boulevards, and the study of crystals and minerals by many natural philosophers (what today we call scientists).