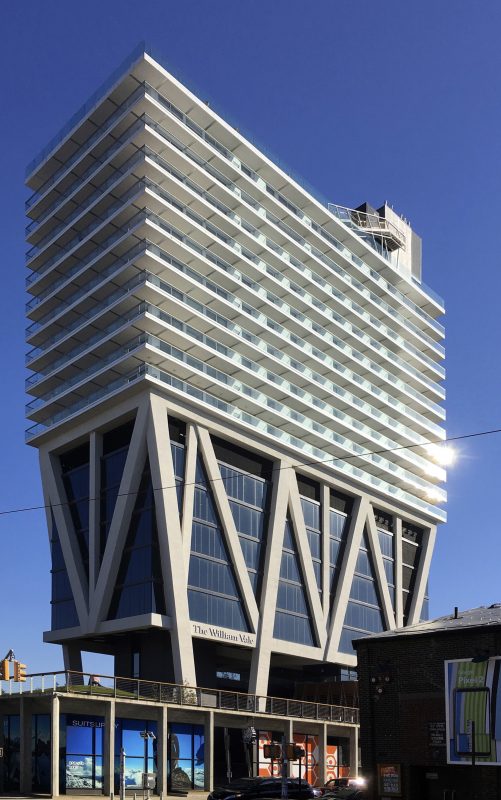 This 21-story project is an expression of Diagonality in the form of structural decoration: that is the message of this bold design completed in 2017.  Designed by Yohay Albo, originally from Israel and Nicholas Liberis, originally from Greece, this complex at 55 Wythe Avenue in the Williamsburg section of Brooklyn, is instrumental in understanding where Diagonality in the 21st century is heading.

Structural members supporting the block of spaces below the balconied hotel floors are canted off the vertical as are some structural members for the lower level commercial spaces. The diagonals of the giant white truss do serve structural requirements but the architects state that they also were introduced to play of the forms of “local bridges and manufacturing facilities…and tower support structures in the area.” The design team go on to say that the truss also “represents a desire to express the sculptural qualities of the building’s structural elements.” 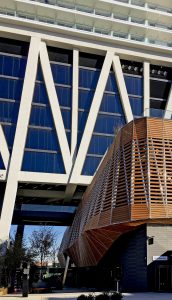 The two narrow end elevations of the truss crisscrossing the five office floors and one open-air public space are symmetrical but the arrangement of members on the long sides is asymmetrical. Certain minor truss members are set back from the primary plane adding to the sculptural feel of this project component.

Diagonality comes into play also in the positioning of stairways leading up to a 15,000 square foot park (designed by Gunn Landscape Architecture) above the ground level commercial spaces and in the configuration of walkways and planters on the park level.

Also, just above the ground level there is a pool area wrapped in an orange slatted skirting to create a sense of privacy.  Here to the diagonal motif is brought into play to further the diagonal geometric motif.  An open-air pedestrian bridge is slung under the office block.  Diagonal structural members boldly angle across the bridge and the ceiling panels and lighting fixtures are also set on the bias.

This page is under construction –