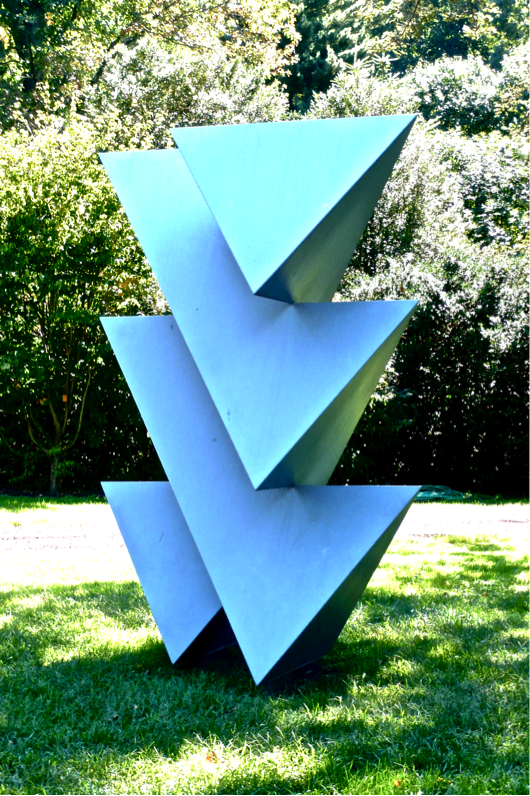 It is a fundamental truth that complex structures always evolve from simpler components.  Such is the history of the universe and all that lies within it. The roughly 37 trillion cells that make up our bodies and complex brains are composed of atoms that once were stardust.

“Simple beginnings” is a central theme in the work of architect-turned-sculptor Robinson Fredenthal, who died in 2009 at age 69. His sculpture titled “After Black Forest” is a familiar sight to visitors at the Morris Arboretum in the suburbs of Philadelphia.  The blue-painted version of this work in the Azalea Meadow at the Arboretum was donated by art collectors Bart and Carol Lippincott who had enjoyed the sculpture for many years in their own garden.  When the Lippincott’s moved to a retirement village, they gave the Fredenthal sculpture to Chestnut Hill’s botanical garden where Bart had been active in creating some of the sculpture installations.  A larger, 12-foot high, black steel version of “After Black Forest” sits at the corner of 34th and Walnut Streets on the campus of the University of Pennsylvania, Robin’s alma mater.

In his youth, Robin excelled in lacrosse, football, and basketball but around 1960, when he was in his early 20s and starting his architectural studies at Penn, he discovered that he couldn’t move as fast as he once did. Nor could he continue to sit at a drafting board or maintain control over pencils, triangles, and T-squares. By 1964 his studies at Penn were interrupted by the illness that later would be diagnosed as Parkinson’s disease.  But his love for design, geometry, and sculpture endured and filled him with a passion to give form to the geometric shapes that continued to fire his untiring imagination. He also saw for the first time the work of sculptor Tony Smith whose work was on exhibit at Penn’s Institute of Contemporary Art in 1966 -67.  That artist’s angular, steel forms brimming with angularity had a profound impact on the development of Robin’s art. 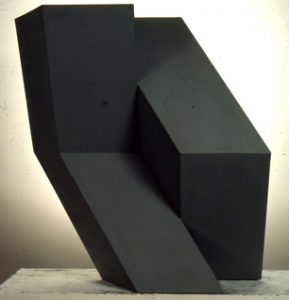 The diagnosis of Parkinson’s was totally unexpected for a man in his 20s.  Robin, however, as his work and life attest, was obviously not defeated. He turned his affliction into an anvil of creativity.  Although control of his body was diminishing, an inexhaustible fire burned within him: a vision of three-dimensional forms he was compelled to bring to life.  But if Robin could no longer work at his drawing board or manipulate an artist’s tools, how could he draw and fabricate the hundreds of geometrically precise models that were carefully organized on the rows of floor-to-ceiling shelves that lined his apartment? The answer is that he worked with faithful assistants who translated his verbal descriptions into small white cardboard models and later into digital forms. Even this was a challenge because Robin was strapped to a wheelchair with little control of his body and, increasingly over time, with little control of his voice.  This relationship of the artist to the assistant is well documented in several loving and intimate videos that can be seen at www.robinfredenthal.com. With the help of his cadre of devoted and selfless assistants, those designs became 5,600 cardboard and wood models now preserved at The Architectural Archives of The University of Pennsylvania.

Robin was also influenced by the work of his Penn architectural professors Louis Kahn, Robert LeRicolais, Romaldo Giurgola, and Anne Tyng who were themselves exploring a vocabulary of geometric forms that I group under the conceptual umbrella of Diagonality.  The phenomenon of Diagonality has a long history that goes back to the pyramids and to the rotated processional axes of ancient Egypt but it blossomed into its modern form in the mid-twentieth century.   Philadelphia at the time was a hotbed of experimentation in this renegade geometric motif. Students and professors alike were twisting conventional box-like forms into angular, sharp-angled designs that challenged the dominance of the age-old, reliable configuration of the right angle.  Expressions of Diagonality can now be found in every city and museum around the world.

One of the solid shapes upon which Diagonality was based back in the 60s is the tetrahedron: a hard-to-visualize for some people, four-sided pyramid composed of equilateral triangles on all four sides including its triangular base. This form, the simplest of the five Platonic solids, resonated deeply with Robin who said to a colleague, “I feel like geometry is God-given.” Whether God-given or not, the tetrahedron is a fundamental geometric building block of the universe, its geometry found implicitly in the architecture of our DNA and explicitly in crystals.   It is the fundamental building block of Robin’s Arboretum sculpture “After Black Forest” executed in 1977.

The personal story of the artist behind this work at Morris Arboretum is fascinating and only enhances our appreciation for this dynamic and beloved piece of sculpture.  Robin was a product of the wild, unconventional hippie era starting in the 60s.  He sported a ponytail, smoked marijuana, and had a devilish sense of humor.  A friend once drove him to Connecticut in a VW to bury his beloved cat in his mother’s back yard.  A cop who had reason to pull the car off the turnpike noticed a pipe and bag of weed in the glove compartment.  Robin was nervously thrashing in the back seat until the cop turned to him and asked: “Okay, what’s in the box next to you?” Sporting his usual serious stare, Robin responded devilishly, “A pound of dope.”  We can only imagine that the cop, fulfilling his duty to uphold the law, opened the box only to find the hardened carcass of Robin’s cat.

On another occasion, when asked what he would do or say if aliens visited him from outer space, Robin simply said he’d hand them a model of a tetrahedron. A fitting answer from an artist who understood the elemental nature of the diagonal and its pervasive artistic expression in Diagonality.