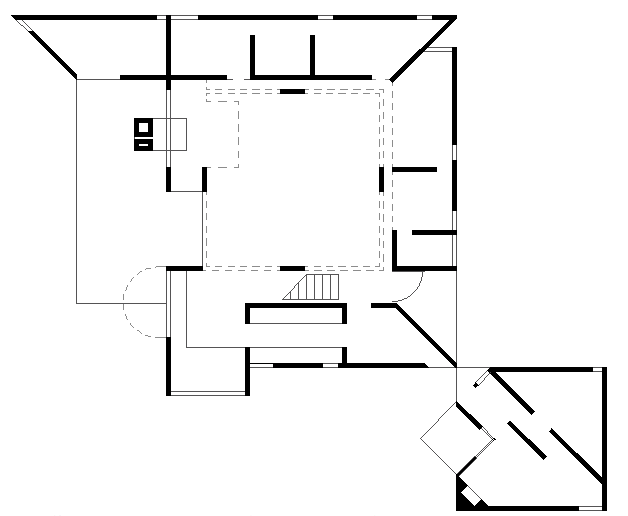 Reportedly, this 1978 design for a Retreat House was produced by the Philadelphia architectural firm, Mitchell/Giurgola, for a mistress of a “(far) northern European automobile manufacturer executive.”  It was published in Process: Architecture No.2, 1977.  The formal clarity of the plan is instructive because it reveals many of the key features of late mid-century Diagonality. 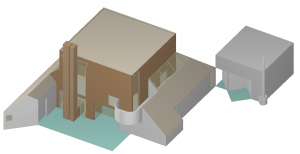 First among these is what some mid-century architects and architecture students (particularly those in or associated with the School of Fine Arts at the University of Pennsylvania) called a Zap or a Zoot.  A zoot refers to the angular geometry of the zoot suit popular in the 1940s in the United States.  It was an exaggerated style characterized by a long loose jacket with padded shoulders and pointy lapels and high-waisted trousers that tapered dramatically from hips to ankles.  A zap refers to a chisel-shaped form intended to exclaim sudden action, a motif that oftentimes appeared in comic book illustrations.  When I was at the University of Pennsylvania (1957-63), these terms had currency, but I never found out specifically which form each term referred to.  Maybe they were used interchangeably to refer to the triangular spaces that jutted out from otherwise orthogonal floor plans, and/or a triangular cutout in an otherwise block-like plan.

In this Retreat House there are several triangular zoots that occur at or near the far corners of the central square space in the middle of the house.  It is interesting to note that windows or full-height openings occur near the apex of the triangles to relieve what would otherwise be a very uninviting constriction of space.  Observe, however, that in the fully formed equilateral triangle that appears in one corner of the ancillary structure no such windows are placed in the acute corners.  If this triangular space was to be used as anything other than a storage space (and not a functionally-configured space at that), it would be a room few people would want to reside in for longer than to just take a peek inside. 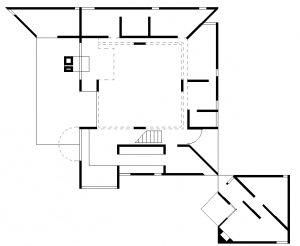 Another interesting geometric feature of the house is how the sloping roof of the peripheral spaces contrast with the flat roofed central area.  This was also a mid-century iconic expression of Diagonality.  What looks to be the entrance to the house (it’s the only opening showing a door swing) is an effective illustration of yet another iconic motif of Diagonality, which I call the splayed entry.  One side wall of the space is orthogonally positioned to the house while its counterpart is splayed to suggest an expression of welcome reflective of how one might wave their hand to the side with palm disposed vertically indicating “be my guest and please enter.” Still another feature of mid-century Diagonality is what I call the open beak, which is the opposite of the spayed entry and appear at another exterior corner of the house.

The Retreat House owes much to Louis I. Kahn’s 1969 Goldenberg House designed for a site in the suburbs of Philadelphia.

Giurgola designed another house with a central square space wrapped on two side with a subordinate ensemble of spaces that terminate at both ends with pointy zoots.  That design influenced the floor plan of a house I designed around 1968 called Weiner Residence. 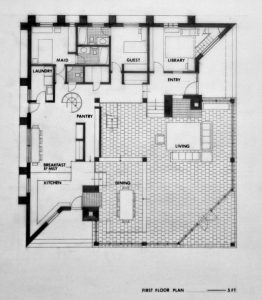 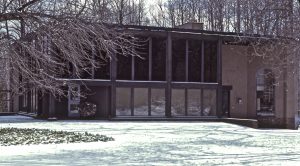 Roughly two decades later I designed the Kimball Residence that even more fully experimented with a wide variety of diagonal relationships engaging with curvilinear forms, all in response to the client’s request for complex geometry. 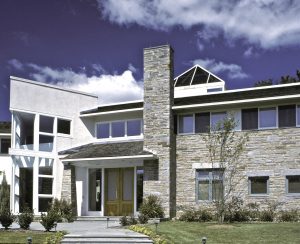 This replication of Diagonality based upon inspiring models is the force that has moved Diagonality along through the decades and resulted in its evolution of form.

Information regarding the Retreat House is derived from an article that appeared in www.quondam.com/22/2237.htm