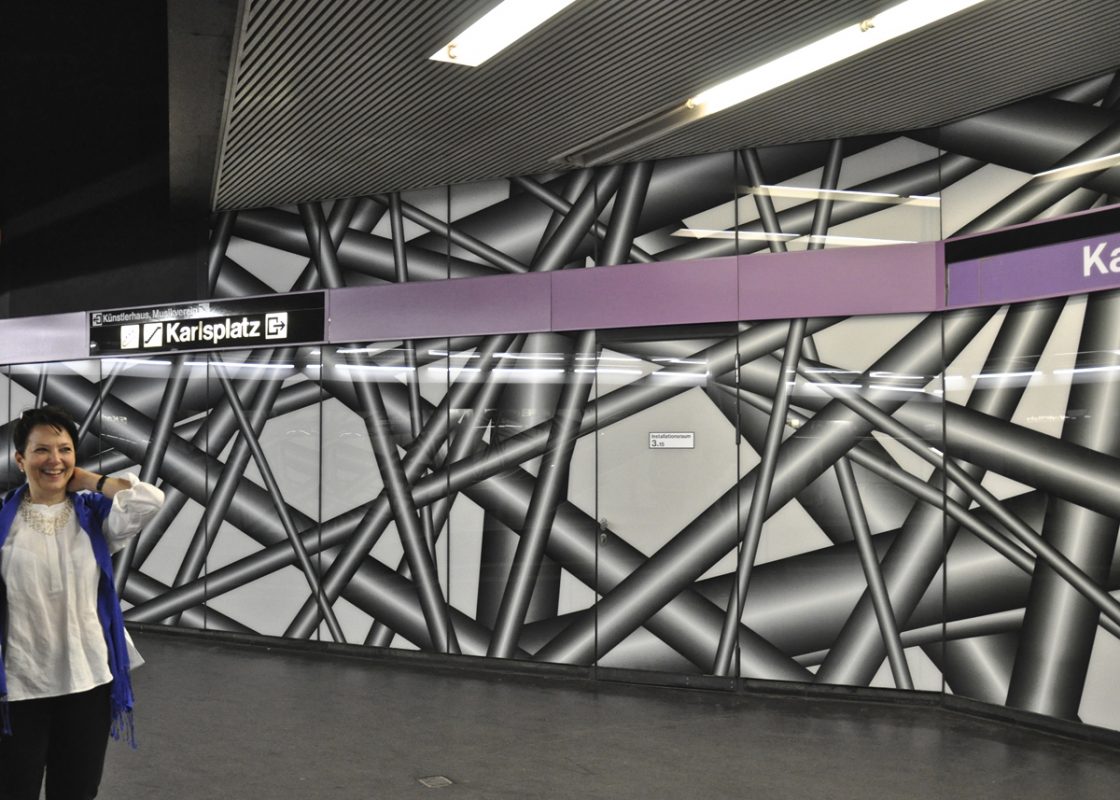 Peter Kogler, deeply inspired by architecture and film, was born in Austria in 1959 and lives and works in Vienna (2018). He transforms interior architectural spaces with dizzying and dramatic computer-generated super graphics, first digitized then magnified and silkscreened onto large sheets of paper like his U-Bahn installation on the mezzanine level at the Karlplatz subway station in Vienna (Wien) executed in 2011/12. Since 1997, Kogler has been a professor at the Vienna Academy of Fine Arts where he leads the Master Class for Computer and Video Art.

The Karlplatz project is one of several of his projects that employs the diagonal motif. The others include the Secession Wien, Siedruck/Papier 1995; the Schanwerk Sindelfingen, Sindelfingen 2010; Peter Kogler – Dimensions 2011; the ING Art Center, Brussels 2016. He employs a white background with black lines: occasionally there is a red accent. These three colors connects Kroger in his own words to: “Bauhaus artists and the Russian avant-garde.” When he is not using a diagonal motif, his work is marked by curvilinear and wormy forms, interlaced motifs, trellises and lattices, alignments of ants, brains and worms, all with a strongly geometric quality. Oftentimes these are installed to create a visual maze resulting from repetitive patterning. 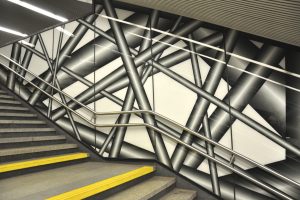 Kogler’s work is strongly psychedelic in nature, intended to arrest and perhaps disorient the viewer. This may be due to Kogler’s pessimistic view of life today.  He has said “The idea of progress, a belief in the future, has been largely lost today, at least in the West.” Perhaps that explains his motif of disintegrating crystals used at the Museum Moderner Kunst Stiftung Ludwig Wien (MUMOK) in Vienna, in 2008.

His pessimistic view aside, the U-Bahn installation at the Karlplatz subway station in Vienna is particularly successful in scale and effect. Interestingly, it originally appeared in the main exhibition space at the Vienna Secession in 1995 just 200 meters away from the Karlplatz station. I (Joel Levinson) found the U – Bahn installation particularly appealing in the angular spaces leading to the train platform making the pedestrian experience lively without being overwhelming. In an interview with Kathrin Rhomberg in 2014, Kogler states the mezzanine, “seemed to lack any clearly defined function. It was just a kind of in-between space where you can get from one escalator to the next. Interestingly, this space had never attracted anyone’s attention before. It was not present as a place in the imagination.” Now it certainly is and a very memorable one indeed.

Kathrin Rhomberg points out in an interview with Kogler, “The main Secession gallery has a completely different character to the subway station at Karlsplatz. It is often seen as a “total space” where everything can be seen at one glance. The space for your intervention in the subway station is a very different diffuse place of transit. So the way your work was perceived at the Secession must have been different. In the subway station, a network of computer-generated pipe shapes seems to dissolve the parameters of the architecture, as did the Secession installation, but the difference is that in the subway station the pipes emphasize the transit function of the space and also its very specific qualities as a non-space. You have already said that the decision for this location was quite deliberate.” 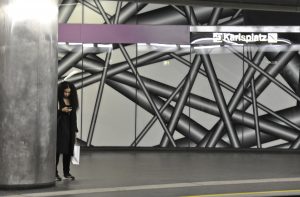 Kogler has pointed out that the pipe motif is central to the modernist repertoire. “You see it,” he said, “in cubism, in the work of Fernand Léger and George Braque in the 1910s.” So it can be said that Kogler is very much aware of his diagonal roots but not by that name and perhaps not so consciously.

Quoting again from the above-mentioned interview:

KR: Using the pipe motif to make architecture dynamic can also be seen as a basic theme of modernism.

PK: Yes. Think of Moholy-Nagy’s famous Light-Space-Modulator of 1930 or the constructivist spaces of the Russian avant-garde, such as in the work of El Lissitzky.

In Jean-François Chougnet’s 2008 article titled Kogler’s Labyrinth, Kogler’s studio is described as clinically clean and that his handmade models and computer screens cohabit in perfect harmony. Jean-François Chougnet in a 2008 article titled Kogler’s Labyrinth described it  as inhospitable but with studied comfort. Whatever the nature of Kogler’s workspace, it is clearly a place that has produced some compelling examples of diagonality in the first two decades of the 20th century.