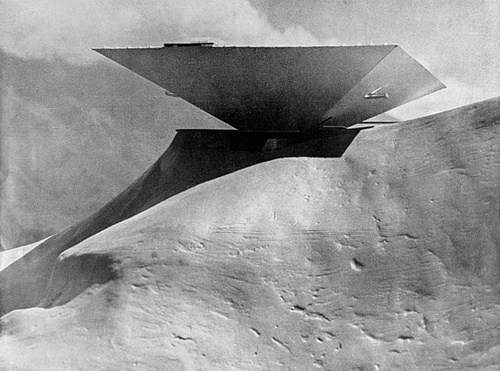 The probable inspiration for the Canadian Pavilion at Expo 67 was the 1945-1955 Caracas Museum of Modern Art by the Brazilian architect Oscar Niemeyer (1907-2012).  The Caracas Museum project, sometimes referred to as the “Stone Flower,” was never built.

Oscar Ribeiro de Almeida Niemeyer Soares Filho is considered to be one of the key figures in modern architecture.  He designed the capital of Brazil, Brazilia, and worked with Corbu and others on the United Nations headquarters in New York.  Inspired by Le Corbusier, Niemeyer was both lauded and criticized for being a “sculptor of monuments.”  He loved abstract forms and curvilinear shapes, the former appearing in the inverted concrete pyramid on the Museum’s exterior and the free-form shapes on the interior. 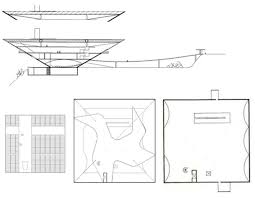 The proposed Caracas Museum was to be constructed near the top of a cliff overlooking central Caracas.  The sight of it would have been stunning.  The rock outcropping of the proposed site-specific lies 20-feet below a street that would have provided access to the building.

The windowless concrete exterior is relieved on only two sides by small balconies.  Rooms and spaces to accommodate exhibitions, instructions and lectures, workshops and administration are located on four floors, and on a mezzanine (suspended by cables from the roof) under the glass roof of the building.  The glass roof, supported by concrete beams and light metal girders, is interrupted by a concrete terrace that spans from one side the pyramid’s perimeter to the other. 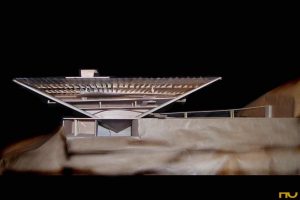 The terrace was intended to accommodate sculpture exhibits. 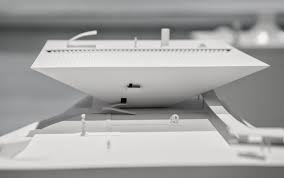 The entire body of the Caracas Museum was self-supporting in contrast to the Canadian Pavilion which has diagonally strutted, inward leaning columns that look somewhat like crutches and are.

Both projects mark instances of architectural design that hollow out the near solid masonry pyramids of ancient Egypt and invert them in a modern era expression of anti-gravity defiance. 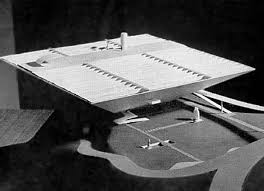