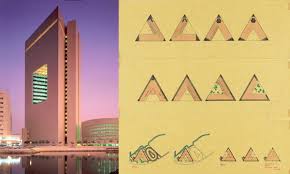 Design studies for this triangular 27-story office building and bank in Jeddah, Saudi Arabia were started around 1978.  It was developed during a period in which the triangle in plan fascinated architects around the world such as I. M. Pei and his design for the East Wing of the National Gallery in Washington, DC.  Construction of the National Commercial Bank was completed in 1983.

Gordon Bunshaft of SOM (Skidmore, Owings & Merrill) was the project architect.  Known for his bold forms, geometric ordering, and refined designs, Bunshaft created a towering iconic structure in a country of immense wealth that could afford this travertine clad building that freely mixes a generous, even opulent amount of unoccupied open-air volumes with income-producing air-conditioned space. 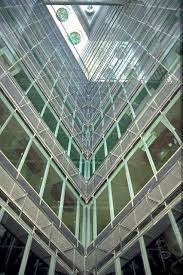 The contrast of windowless exterior walls with planted “interior” courtyards is arresting and yet it is built upon what SOM describes as “important features found in traditional Islamic architecture: natural ventilation and inward orientation.” 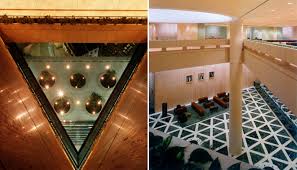 From the outside, the building looks elemental and monumentally simple but this belies the spatial and visual complexity inside the triangular envelope.  Light is brought into the triangular volume through colossal openings that vertically interconnect the windowed courtyards.  Heat rises through the structure and is naturally discharged through a triangular opening in the roof. 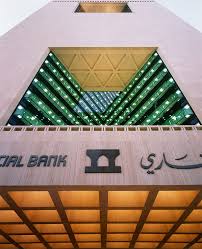 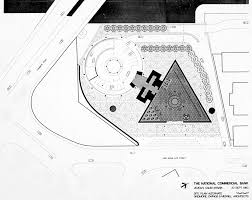 There have been many triangular office buildings built since high-rise buildings were first constructed around the beginning of the 20th century.  Most of these were designed not to create a triangular building but to squeeze as much rentable space onto a site whose triangulate shape was the result of a non-orthogonal street plan.  The acute angle where the streets intersected was not, however, telescoped into the shape of the building: that sharp corner was either blunted or rounded, unlike the sharp corners employed in the isosceles triangle National Commercial Bank building in Jeddah.  Here the chisel points are celebrated and become a distinguishing part of the design.  Although all three acute angles are shown on the interior of the building on the banking floor, only one such angle is expressed on most of the upper floors.  Mechanical shafts (triangular in plan) at the free ends of the chevron create right-angled ends to the office floors. 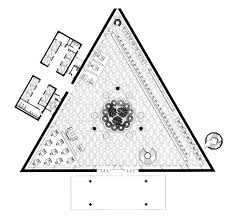 The building won several awards from the American Institute of Architects.