JOEL LEVINSON – Evolution of a Diagonalist

JOEL LEVINSON – Evolution of a Diagonalist

Joel Levinson (1938-202?) is a semi-retired Philadelphia architect who received his training (1957-1963) in the School of Fine Arts at the University of Pennsylvania, hereinafter referred to as Penn. Levinson is also the creator of this website. While a student at the university in his second or third year, he became aware that his fellow students and professors were exploring a new design motif that Levinson came to call Diagonality. At the time, some colleagues referred to the motif as Zaps and Zoots suggesting comic book expressions of bold and daring gestures. After a short time they dismissed this “fad” and soon forgot the matter.

Levinson saw something deeper in this phenomenon and saw that Diagonality had roots that extended back at least to the beginning of the 20th century. He also observed that Diagonality as a design motif had certainly not come and gone with the Zaps and Zoots but had been and was continuing to be a permanent transformational design shift, not just in architecture, but in many allied design fields such as engineering, landscape architecture, interior design, and urban design, to name those fields most closely related to architecture. Although no architectural historians were writing about this shift in the geometry of the built environment, Diagonality had already become a global phenomenon by this time.

In contrast to other students, Levinson was circumspect about adopting this new geometric motif. However, at the same time, he wholeheartedly immersed himself in an independent course of study as he collected examples of Diagonality and began to organize his thinking around this emerging theme. This article is what might be called an (auto)biography of my engagement with Diagonality in my own work (and here I switch to the first person for clarity).

I begin with my student work and then move on to examples of Diagonality in the designs I produced as a practicing architect. However, first I show a house I designed in my first or second year at Penn to illustrate how orthogonal my approach to architectural design was at the time.  I certainly knew what a diagonal line was but the idea of diagonality as a design motif in architecture had not yet dawned on me. 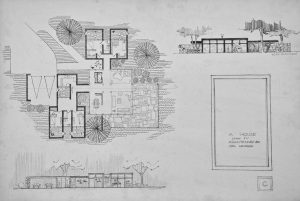 The early house design was logical, thoughtful, and carefully considered but square in the sense of being boring. It deserved a grade of C, and that’s how it was graded. However, my professor in my second year at Penn was the renowned Robert Venturi who was at that time working on his book Complexity and Contradiction in Architecture. Venturi mentioned the notion of diagonality in his book but did not identify it as a global and historical phenomenon. The assignment Venturi gave us at the time was to design a grammar school. I came up with a triangular arrangement of three-story wings united at ground level by a skylighted common space. Above the common space was the schoolyard with the skylight enclosures serving as angular sculptural elements and visual “gateways.” 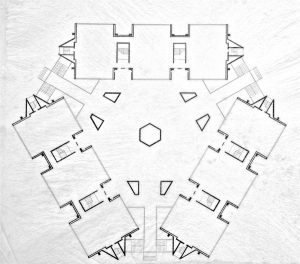 The triangular arrow-shaped elements at the end of each wing were not originally triangular. Those arrowhead elements were Bob Venturi’s suggestion. I had drawn rectangular mechanical shafts and Bob suggested the triangular form. That shape better united the end of one wing with the one next to it. This was my first initiation into the world of Diagonality. Another assignment with a different professor was a summer school on the Mediterranean coast of France.  I was obviously now into diagonal relationships but I seem to recall that my professor at the time regarded this early scheme as too undisciplined. In retrospect, I think he was dead wrong! However, his argument was strong enough that I abandoned this loose and romantic scheme and opted for a much more orthogonal scheme, which is illustrated directly under the loose scheme. It retained a few minor vestiges of diagonality from the earlier scheme. 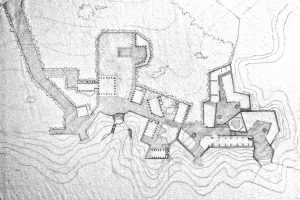 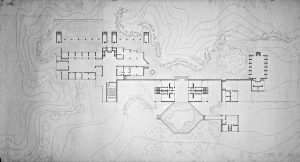 During my fifth year at Penn, I had to design a thesis project. Consistent with my growing interest in science and space, I choose to design a Museum for the Space Age on the mall in Washington, DC. The rendering directly below illustrates my final design. It is quite orthogonal save for the diagonal cross-bracing of the floor panels that cross the main exhibition space. To accommodate changing exhibits, the floor panels can be moved around in the central hall by an overhead crane. As in the summer school on the coast of France, I started with schemes that were far more diagonalized. My cautious, more practical nature led me back to the orthogonal scheme as illustrated. 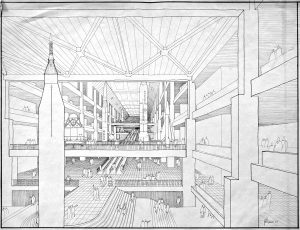 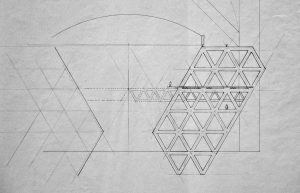 I was forced to drop out of school in my final year and work for an architectural firm. The public playground I designed for a site in Philadelphia reveals my growing interest in diagonal relationships. 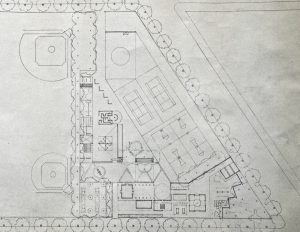 In my second job as an architect trainee, I collaborated with my employer and entered a competition to design a fountain for center city Philadelphia.  Initially, I envisioned a hollow tower consisting of metal diagonal bracing in which the fountain jets would rise and dance like caged birds. The second scheme was more fluid, consisting of curvilinear curtains of water or some other material with diagonal slopes. The final scheme was based on using a piece of sculpture that would be built by sculptor Kenneth Snelson, which Snelson based on Buckminster Fuller’s concept of tensegrity. The levitating angular sculpture of stainless steel bars and wires is supported by bronze poles. 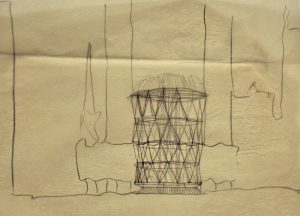 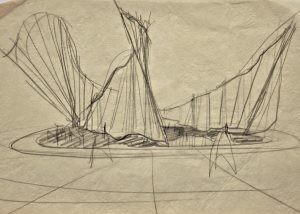 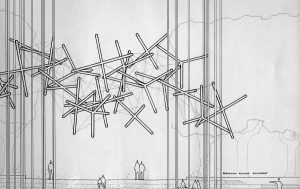 In my earliest house commission, the Brasler Residence, I explored an orthogonal floor plan with various diagonal elements. The final scheme only retained two diagonal features in an otherwise predominantly orthogonal layout. The breakfast-room was built with the angled wall as shown in the kitchen layout below. 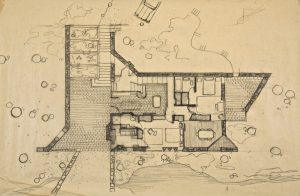 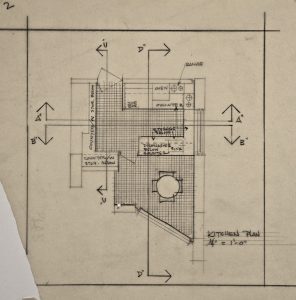 A more adventurous use of diagonals in the Zap/Zoot vernacular was the Weiner Residence I designed with sharply angled corner elements and the angled wall that leads from the living room-dining room to the gardens. 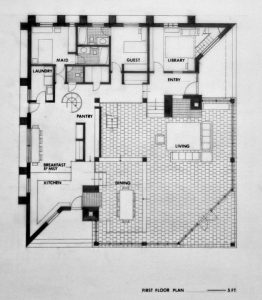 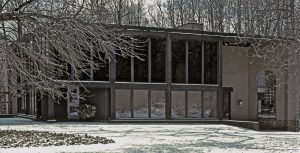 A project from this period is a house I designed for Marvin Orleans that never got built. It was a house that straddled a stream on a property with two existing traditional-style houses. My proposal involved connecting a bedroom wing to the main house using a glass bridge set on an angle. 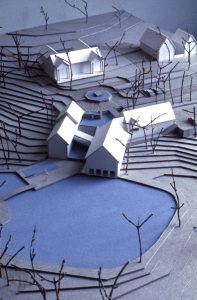 I was commissioned to design a prototype energy conservation house by the American Wood Council. This project, the Spaetrium House, focused on creating a passive solar collector in the form of a two-story sunroom whose axis is rotated 45° to the orthogonal axis of the rest of the house. 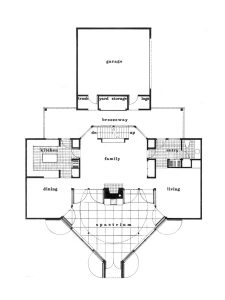 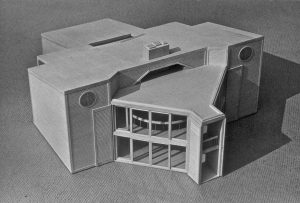 Finally, at mid-career, I was approached by a couple that wanted a house with a lot of angles and curves. The Kimball House offered an opportunity for me to explore a geometrically complex building; and it was built as designed.

The working drawings reveal how complex the geometry was. Fortunately, we produced very detailed construction documents, so nothing was lost or compromised when the house was built.  A note of whimsy is introduced in a steel structural element in the form of a K-shaped column. However, I introduced the secondary geometric theme of a lightning bolt. 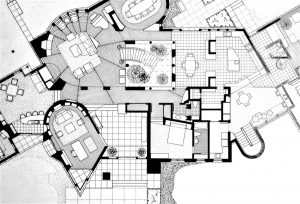 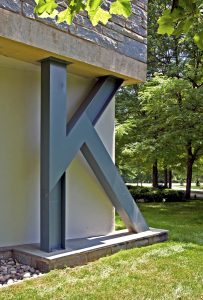 Diagonality came into play in a restrained way in a new house I designed for Barry and Joanne Maser in Chilmark on Martha’s Vineyard off the coast of Massachusetts. Again the house is orthogonal but the stair is designed with subtle angular geometry that invites ascent. Diagonal geometry in the form of trusses is introduced in the structural system. The dramatized angle bracing of the structural system was employed to resist horizontal forces imposed by hurricane winds. 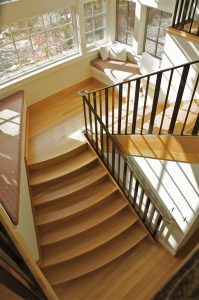 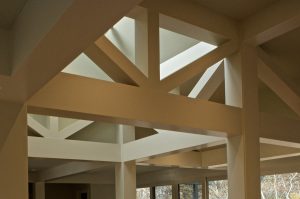 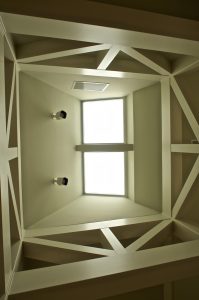 Lastly, I present a stand-alone steel column I designed for a house I designed for Nan and Ron Smolow near New Hope, Pennsylvania. The angularity of the complex “capital” would not have come to be had it not been for my immersion in the theme of Diagonality. While my involvement with diagonality is fairly constrained compared to other architects working in the modern era, the examples presented in this article reflect my deep interest in a geometric motif that is clearly the SIGNATURE GEOMETRY OF THE MODERN AGE. 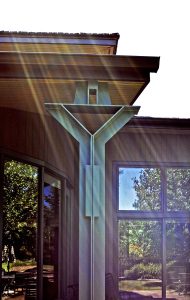