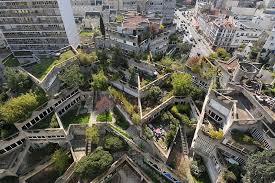 The following article is based largely on a thesis written by Anton Zoetmulder titled:

JEAN RENAUDIE: to give voice to that which was silent. 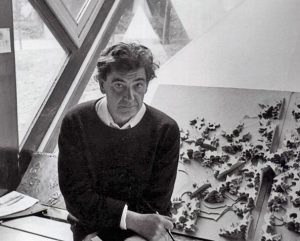 The original thesis document can be found at https://issuu.com/antonzoetmulder/docs/jean_renaudie__to_give_voice_to_tha 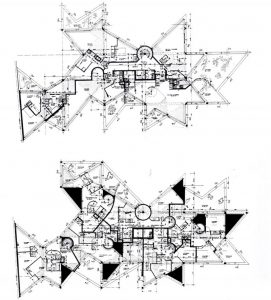 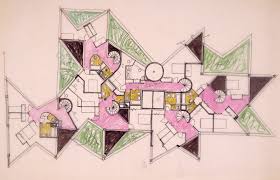 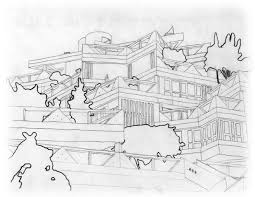 Jean Renaudie (1925-1981) was a French architect best known for his housing /multi use project in Ivry-sur-Seine, a commune in the southeastern suburbs of Paris, 3.3 miles/5.3 kilometers from the center of Paris. I (Joel Levinson) first saw an image of Renaudie’s project in a 1979 publication titled Transformations in Modern Architecture written by Arthur Drexler and published by the Museum of Modern Art in New York. The project looked like an example of Diagonality on steroids. This was not a timid urban complex but one so expressive of the diagonality motif that for me it represented yet another iconic expression of the theme that convinced me once again that Diagonality was not a figment of my scholarly imagination. 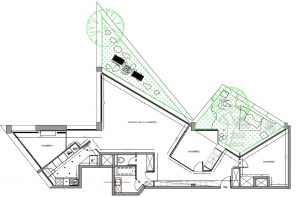 Jean Renaudie was the architect/founder of the l’Atelier de Montrouge and the person responsible for the complete renovation of Ivry town center. After an education at the École Nationale Supérieure des Beaux-arts, he apprenticed with the famous master of concrete construction Auguste Perret. In 1958 he founded l’Atelier de Montrouge with Pierre Riboulet, Gérard Thurnauer and Jean-Louis Véret. 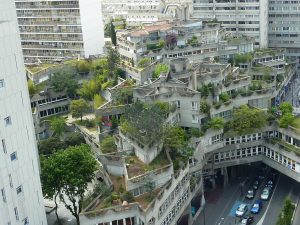 In light of the starkness and simplicity of its plastic effects, their style is sometimes described as “brutalist,” which was an architectural design movement of mid-20th century made famous (in part) through works by Le Corbusier.  In 1968 Renaudie broke with his partners and set up his own firm in Ivry-sur-Seine, oftentimes collaborating with Renée Gailhoustet, whom he met in the office of Roland Dubrulle working on the Ivry-sur-Seine. Gailhoustet, born in Algeria, was also a teacher and authored a number of books. 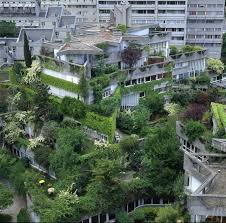 Anton Zoetmulder describes the work of Renaudie and Gailhoustet as resembling concrete mountains composed of stars or triangles. The geometry is pure but the results are complicated. ­­ Anton Zoetmulder’s interest in the work of Renaudie derived from his investigation into Dutch Structuralism, which Guus Beumer describes as being ‘a collectivitist movement’ with a ‘deep humanistic language.’ The intellectual legacy of the movement is centered around the work of architects such as Aldo van Eyck, Hermann Hertzbergr, Piet Blom, Herman Haan and Joop van Stigt. The movement had its heyday in the 1950s and 1960s. Beumer goes on to say that the social use of spaces and the social bonds the buildings would encourage was central the movement’s goals. Consequently, the creation of meaningful social spaces is at the heart of the movement. The term ‘structuralist’ does not refer so much to building structures (beams and columns) or architectural form but rather to a social ideology. In conclusion one could say that ’structuralism is a theoretical paradigm emphasizing that elements of human culture must be understood in terms of their relationship to a larger, overarching system of structure.’ Although Hermann Hertzbereger’s work can be very orthogonal, his 1987-1990 scheme for the Ministry of Social Affairs employs an octagon-based cellular motif for the structural system. 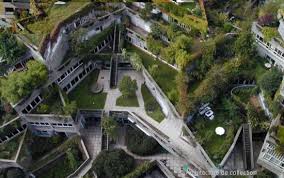 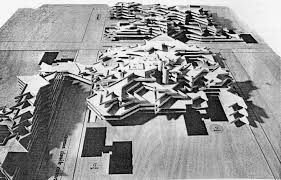 Following is a list of projects executed in the decade between 1970 and 1980. The Jeanne-Hatchette shopping center brought him international recognition and from the French Minister of Culture was awarded the Grand Prix National de l’Architecture for the totality of his creative works.

I (Joel Levinson) take full responsibility for any errors or misinterpretations associated with converting Mr. Zoetmulder’s thesis into this condensation that is abbreviated to focus on the theme of Diagonality in Mr. Renaudie’s work. Additional information was found on Wikipedia and other sources.