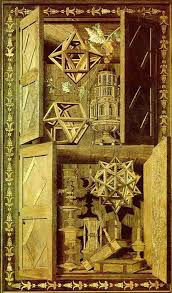 During the Renaissance, the creation of panelized scenes using inlaid wood, a craft called intarsia, was the geometrical art par excellence. In 1982, author Judith F. Tormey wrote a pioneering article in the Scientific American titled Renaissance Intarsia: The Art of Geometry.  Many of the historical facts presented below are her findings. She asserts that intarsia “embodied the development of a mathematical procedure for representing the three-dimensional world in two dimensions.” This melding of the art of perspective with interest in geometry resulted in an art form that arguably did much to increase awareness and appreciation of angularity and a “fractured” image as design motifs worthy of further exploration.

For people living between the latter half of the 15th-century and the first quarter of the 16th-century, intarsia functioned like today’s movie theaters and TVs; it was a form of entertainment. Perspective and complex geometric forms were dramatically and precisely created by intarsiatori, “the masters of perspective.” Just in Florence alone in 1478, 48 workshops were churning out these meticulously crafted ‘paintings,’ not on canvas but in wood. One might say it was a craze.

Before the mid-15th-century, intarsia had been a peripheral art, focused simply on creating decorative architectural borders—mere embellishments. Then came a dramatic and expansive change.

Street scenes and architectural complexes, both real and imagined, were precisely rendered using as many as 1,000 pieces of ebony, cypress, boxwood, walnut, and fruitwoods selected for just the right color and gray value to create the illusion of depth and verisimilitude.

“…the natural qualities of the wood were modified by staining or burning to enhance the sense of contrast and the illusion of depth.” The intarsiatori glued the wood chips to a backing board of walnut, then sanded the panel smooth to hide the joints before varnishing. These views were often formulated to suggest someone looking through an open window. Tormey places this new art form in context. “Many panels convincingly depict the contents of a cupboard whose doors are ajar.” To complete the illusion, the artist added a two-dimensional rendering of shutters. This approach involved the application of geometrical laws. 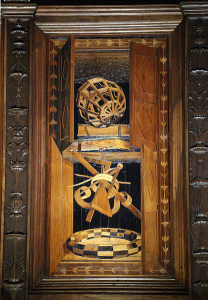 “The sudden flourishing and the subsequent fortunes of intarsia coincided with the Renaissance effort to give art a mathematical basis…intarsia dramatically exemplifies the fusion of art, mathematics and philosophy during the Renaissance.”

Of particular significance regarding diagonality, Tormey indicates that: “One of the greatest practitioners of intarsia, the Olivettan monk Fra Giovanni da Verona, constructed panels that incorporate geometry explicitly. He represented geometrical objects, in particular various polyhedrons.” For the person interested in this history in more detail, I quote from Tormey’s other writings:

“Of special importance for an understanding of the intense interest in polyhedrons during the Renaissance is the influence of the Platonic Dialogues, particularly the Timaeus. Although many of Plato’s works had been translated into Latin and were known to Renaissance scholars, it was the Timaeus that most affected the emerging theory that there was an isomorphic relation between the mathematical foundation of pictorial representation and the mathematical structure of reality. Commentaries contained arguments for this intellectualized conception of art.” 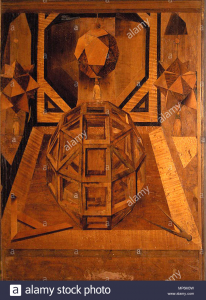 “In the Timaeus four or five regular solids (which have been called the Platonic solids) are linked to the four fundamental metaphysical elements: the cube is the form of the earth [curious from today’s perspective but not in the context of a world seen as flat and one in which the right angle, ruler in mathematics and construction, reigned supreme jl], the octahedron of air, the tetrahedron of fire [which seems odd in the sense that fire is movement and causes changes in things but the tetrahedron is the most stable of geometric polyhedrons] and the icosahedron of water. The fifth regular solid, the dodecahedron, is said to be the form of the universe. The Renaissance mathematician Luca Pacioli (ca.1445-1514) echoed this Platonic theme when he made the same associations in his De Divina Proportione . . .

“Fra Giovanni da Verona c.1520 Monastery of Monte Olivetto Maggiore (near Siena) A seventy-two sided sphere, a mazzocchio, and some instruments used by geometers. The polyhedra in the above two panels are based on Leonardo’s drawings of “solid edge” models, published in Pacioli’s influential 1509 book The Divine Proportion. 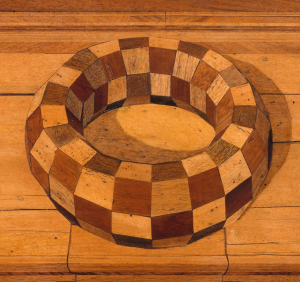 “Under the influence of the Timaeus Piero della Francesca sought to reduce all visual appearances to constructions consisting of the five regular solids. After all, the Platonic solids reflected the design for the construction of the universe that was employed by Plato’s ‘master craftsman’ (the Demiurgos); thus they became symbols of divine perfection and order. Both Alberti and the philosopher-mathematician Nicholas of Cusa (1401-64) maintained that mathematical symbols were the best way to represent God, since mathematical forms were permanent, universal and indestructible.

“Some of the most striking panels in intarsia contain, then, representations of geometrical solids. These were done by Fra Giovanni sometime after the publication of De Divina Proportione. The sequence is suggestive. The solids discussed in Pacioli were elegantly realized in woodcuts by Leonardo da Vinci, whose close association with Pacioli in Milan during the writing of De Divina Proportione and later in Venice is well documented.

“A famous inscription over the entrance to Plato’s Academy read; ‘Let no one unskilled in geometry enter [here].’

This, too, had echoes during the Renaissance. Alberti counseled artists not to attempt their work unless they were familiar with geometry, and Leonardo admonished that no one unfamiliar with mathematics should read his own advice to artists. 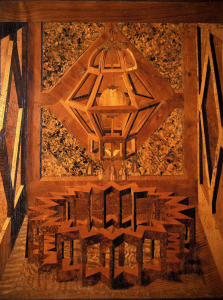 “By the middle of the 16th century the artistic climate had changed radically. Michelangelo, for one, protested against the formulation of rules for pictorial composition; he complained that all the reasonings of geometry and arithmetic and all the proofs of perspective were of use to a man ‘without the eye.’ Art theorists began to criticize the attempts to put artistic representation on a mathematical basis.

“Soon mathematics, which had been honored by the preceding century as the firmest foundation for pictorial art, was disparaged with great intensity. In his Idea of Sculptors, Painters and Architects (1607) Federico Zuccari, a defender of the mannerist view, denied the relevance of mathematics altogether. ‘I say [he asserted] that the art of painting does not derive from the mathematical sciences, nor has it any need to resort to them to learn rules of means for its own art, nor even in order to reason abstractly about this art: for painting is not the daughter of mathematics but of Nature and of Drawing.”

“Unlike painting, it [intarsia] could not transcend its roots in perspectival theory, except perhaps by a leap into abstraction not encouraged by the ascendancy of mannerism and the Baroque. In fact, the ‘cubistic’ quality of the best intarsia panels suggests a closer aesthetic affinity with the 20th century than with intervening centuries.”

Illustrations include the icosahedron, the dodecahedron, and the cuboctahedron, drawings that remind one of the drawings by the 20th-century architect/engineer R. Buckminster Fuller. (March 1998)(go to p. 187 for illustration)

“It has been shown by G. L. Hersey that Pythagorean number mysticism [what Tormey calls Pythagorean aesthetics jl] was a dominant mathematical philosophy of the age; and that the proportional relationships in Renaissance architecture along with its geometric forms were invested with symbolic meanings that can only be recaptured through an understanding of the influence of Pythagorean ideas.” (Tormey 1992 +-)

“Many Renaissance architectural theorists accepted the view expressed by Vitruvius that ‘The Form of the temple should be analogous to the character of the divinity.’ Images of the divinity dominant during that period and directly associated with interpretations of the cosmos were: God, the divine geometer, and God, the divine architect. [Tormey cites Wittkower as her reference jl] These images were linked to the Pythagoreans, in part, through the influence of Plato’s Timaeus, and through the development in both the Italian and English Renaissance of a distinctly Pythagorean aesthetic doctrine [here Tormey cites Heninger] as her reference.” (Tormey 1992 +- p. 2)

Intarsia ended about 1550, but I leave the reader to judge, based on the images below, whether intarsia was an antecedent that directly influenced the art of the modern era, particularly Cubism and other expressions of Diagonality.