HOUSE OF TOMORROW and the FAGAN/McMAHON HOUSE

HOUSE OF TOMORROW and the FAGAN/McMAHON HOUSE 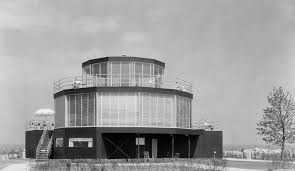 The glass and steel HOUSE OF TOMORROW was designed by Chicago architect George Fred Keck (1895-1980) for the Century of Progress International Exposition in Chicago in 1933.  The exposition celebrated innovations in architecture, science, technology, transportation, new building materials and design in general. The House of Tomorrow was supported by a steel, prefabricated framework that allowed the house to be erected in three days. 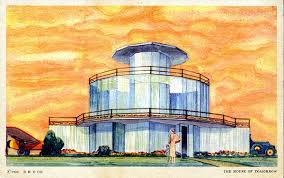 Unfortunately the house was not located in a prime location at the fairgrounds, but it was still quite popular and was one of five other houses loaded on barges after the fair and floated across Lake Michigan to Beverly Shores, Indiana (Indiana Dunes National Lakeshore) where the houses are currently being restored by the National Park Service and Indiana Landmarks.

Keck was born in Wisconsin and studied engineering and then architectural engineering before opening his own practice in 1926, following a short stint working in New York.  This educational background accounts for his technological orientation in design.  Keck was influenced by the Deutscher Werkbund, the work of Mies van der Rohe, and the International Style generally, which had its roots in Europe.  Le Corbusier, the famous 20th century Swiss architect also impacted the young Keck, particularly his 1926 book Towards an Architecture.  In fact, Keck designed the House of the Future starting with the mechanical system and worked outwards, an approach seemingly in contrast with Corbu’s highly sculptural approach to design.  According to Robert Bruce Tague (chief draftsman for the Keck office for ten years starting in 1934) “Keck was the only major architect in Chicago doing Modern.  There was nothing else modern to look at except the Art Deco office buildings of Holabird and Root.” While this sounds like something of an exaggeration, it can also be said that Keck was also influenced by a fabulous, (mostly) three-story brick, octagonal house with wrap-around porches that had been built in 1854 at 919 Charles Street, in Watertown, Wisconsin, the block that young Keck lived on before moving to Chicago.

The octagon house was designed, engineered and built by John Richards six years after publication of Orson S. Fowler’s very influential book “The Octagon House, A Home For All, ” a book that inspired the construction of thousands of octagon houses in the United States and elsewhere and which contributed to the break with residential construction dominated by the right angle.  Keck admits to being influenced by the Watertown Octagon House even though his House of Tomorrow is an implicitly twelve-sided structure (a dodecagon). Both houses are similar in that a central staircase unites the three floors; the central stair being a feature that appears in many octagon houses that were built during the Fowler Octagon Fad era. 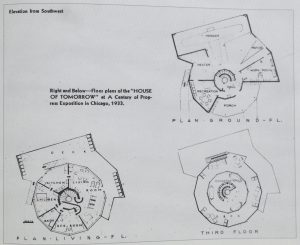 The House of Tomorrow is significant because it showcased modernist design in a building that clearly broke from the orthogonal geometry that mostly dominated residential architecture prior to the 1930s.  The House of Tomorrow may also have been inspired by Buckminster Fuller’s 1920 Dymaxion House, a six-sided, single family dwelling designed as a machine for living.  The Dymaxion House was never built. 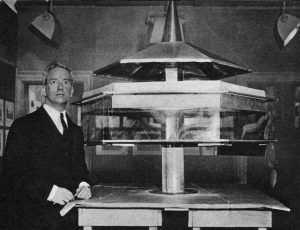 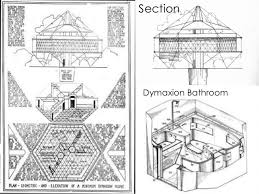 Keck’s Fagan House, which the architect designed in 1948 for Abel and Mildred Fagan in Lake Forest, Ilinois, goes even further in expressing the geometry of 20th century Diagonality in its purest form. 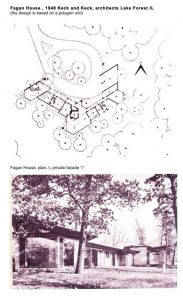 During the fifty years I’ve been investigating the Phenomenon of Diagonality, I have seen many floor plans utilizing the diagonal motif.  The floor plan of the Fagan House is noteworthy due to its sophisticated geometric manipulation of partition placement and the orchestration of spatial effects. 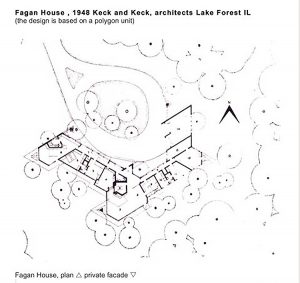 In a 1951 issue of Architectural Record, it was said that “A point was made of the angular placement of large glass areas not only for the view but ‘also for the reflective values of the glass, which add a note to the spatial feeling of the house, and rid it of the monotony of the rectangular unit.'” 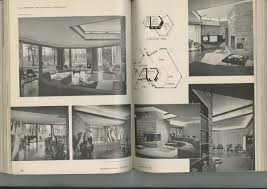 Regrettably, the Fagan House is currently threatened with demolition, which would be a great loss in terms of losing a critical example of early 20th century diagonality in residential construction. 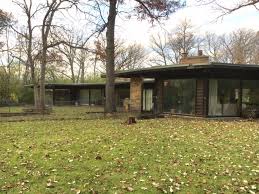 Inspiration for the Fagan House may have come from Frank Lloyd Wright’s passive solar Usonian Houses of the 1930s that had floor plans and details using numerous diagonal motifs.  Some houses, such as the Hanna House (1936) were based on diagonal planning grids as illustrated below. 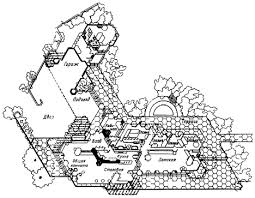 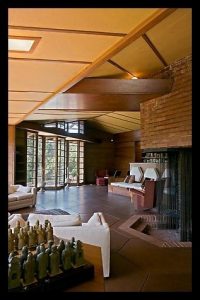