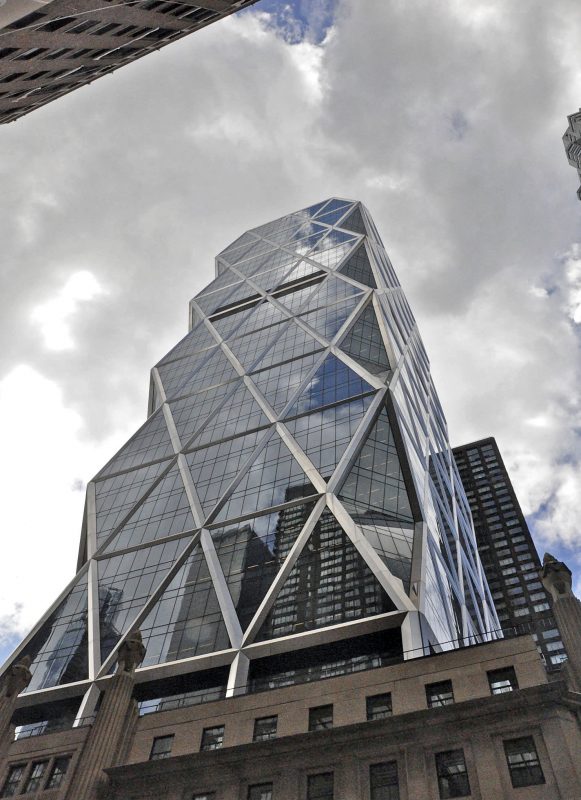 William Randolph Hearst had demanded that his six-story corporate headquarters in New York City be engineered to support a future skyscraper. 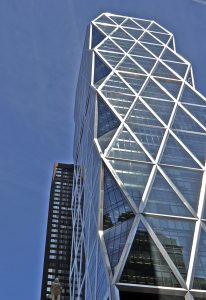 Lord Norman Foster, an English architect, followed through with his design of the 46-story Hearst Tower. If Foster’s work looks like it echoes some of the structures designed by R. Buckminster Fuller, it is for good reasons: Fuller was a powerful influence on Foster early in Foster’s career. The two of them collaborated on the design of a geodesic dome, a model of which sits in the gallery at the Norman Foster Foundation in Madrid, Spain. Foster grew up in Manchester, England and raised funds for his university education at the Manchester School of Architecture and City Planning by doing “‘anything to pay the fees’, which included selling ice cream, working in a bakery, and moonlighting as a nightclub bouncer.” After getting a master’s degree at Yale School of Architecture, and after setting up a forerunner to the firm that now bears his name, he had by chance a lunch meeting with Fuller that led to them collaborating on several projects. Fuller’s engagement with technological solutions has been embraced by Foster throughout his career. Diagonal external framing systems, such as the one at Hearst Tower, was one of the results that grew out of Foster’s intimate connection with Fuller’s geodesic domes. 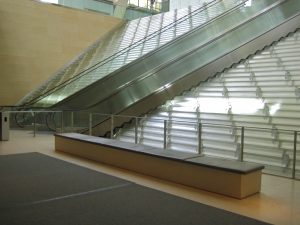 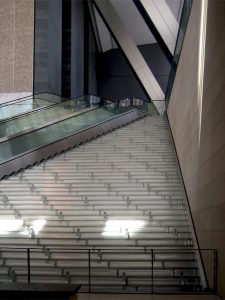 [1]The diagonal motif is also expressed in the angular positioning of the escalators that slice through a water sculpture carrying visitors up to the main lobby. Ice Fall,[2] by artist/designer James Carpenter, involves 50 tons of cast glass prisms and accent blocks arranged in a multitude of diagonal patterns that capture light from above and projects it diagonally, extending the theme of the “tower’s diagonal grid structure.”

[1] This arresting design feature (called bird’s mouths) required the development of a special window cleaning system that itself cost $3M to build and 3 years to develop.