GÜNTHER DOMENIG – Diagonality in the work of a troubled genius

GÜNTHER DOMENIG – Diagonality in the work of a troubled genius 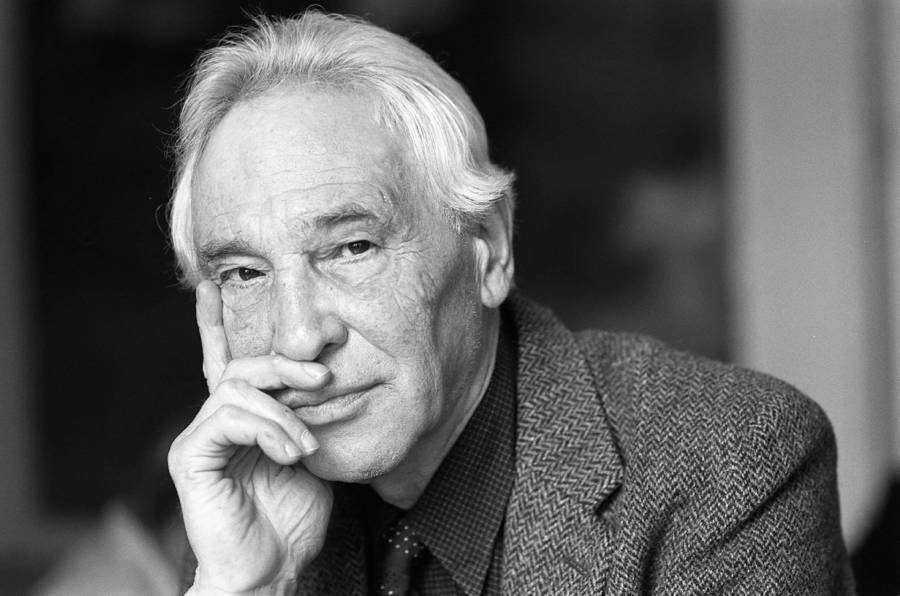 Günther Domenig was a little-known but important Austrian architect who died in June of 2012. I had emailed him in 2005 when I was working on a chapter devoted to his work in my book titled THE DARING DIAGONAL. He sent me a copy of a recent book about his work, which I found both very stirring and troublesome. His engagement with Diagonality cannot be disconnected from his life experiences and it is in that framework that I write this profile. 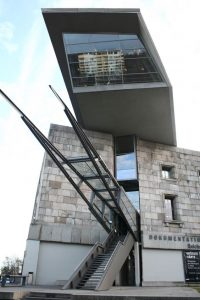 After his book arrived, I wrote to him saying, “I suspect most authors do not send their text to the person whose work they are writing about, but I feel the need to do this on several counts.” I explained that I am Jewish, at least culturally…[and] “you are Austrian and from a family that you yourself identified as having been extremely caught up in the Nazi movement. So, I must be careful (respectful) with you and my readers so that I am not charged with the misdeed of writing from an unfairly Jewish perspective.” I went on to say, “So I have been…trying to understand you through your works and through what I have read of your past and also what I imagine of your past. But it is here that I do not want to falter. I want the deep truth…so I hope you will respond to my writing with total candor and frankness. If I am way off in my…speculation about the various psychic currents that inform or direct your architecture… I hope you will set me straight.” Domenig’s assistant kindly translated my text (abbreviated below) for Günther’s review and wrote back saying, “You are on the right way and Mr. Domenig finds your text excellent!” 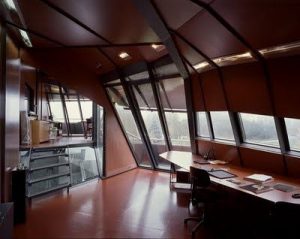 Günther Domenig was five years old when Germany, under the control of its Austrian-born madman, Adolf Hitler, invaded Poland at the start of World War II. Günther’s father, Herbert Domenig, was an Austrian judge and in his son’s own words, ‘a radical Nazi.’ Herbert avoided combat but was involved in recruiting new soldiers. Later he presided over cases against the partisans and condemned some to death, but shortly before the war’s end, the partisans killed him. One wonders what psychological scars these events may have caused Herbert’s son, Günther, growing up in a family dominated by a father filled with hate for Jews and a predilection for violent solutions to social conflict—then his father’s own death by revenge. Günther eventually came to terms with the fact that his father was the willing tool of a vicious political group and that, Hitler, another Austrian, had thrust the world into a barbaric conflict of titanic proportions. 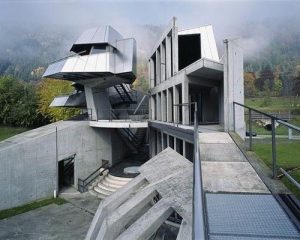 I’ve wondered whether Günther, at any time, shared his father’s sympathies for the Nazi movement. He did state that this entire chapter of history was a ‘burdensome situation [and that] this is something that cost me ten years of creativity…’ Günther spoke those words in December 2004 at an Austrian Cultural Forum where he was interviewed for an exhibit titled “Günther Domenig: Structures That Fit My Nature.” Of the buildings exhibited, two are particularly relevant to the thesis of my book on Diagonality. One building is called the Documentation Center of the Nationalist Socialist Party Rally Grounds in Nuremberg, Germany. The other is a ‘residence’ he designed for himself—but oddly not for his use—called Steinhaus, or Stone House. Both buildings reflect on his nature in a searing manner. 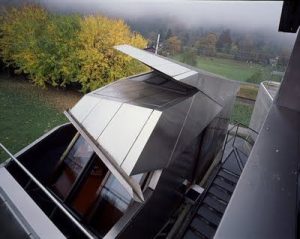 During Hitler’s reign, the Rally Grounds and Nazi Party Congress halls consisted of a U-shaped complex of connected wings designed by Albert Speer, Hitler’s long-time trusted architect. Domenig’s design, which alters the original structure won first place in a competition and was executed between 1998 and 2001. It houses the archives and history of Nazi Germany. Domenig’s design impaled the original u-shaped complex with a long, glass enclosed, corridor-like diagonal spike of new construction. The spike, a highly expressive diagonal feature that slopes up from grade ripping violently through the otherwise orthogonal (right angle) geometry of Speer’s complex, penetrates several of the old large halls. Günther’s challenge was to spiritually and architecturally transform the site into a memorial of hope and yet it seemed to me that Domenig also felt compelled to thrust a figurative spear through the building and, in turn, to thrust a spear through the very body of Nazi brutality. It seems he also wanted to turn the weapon inward, Japanese-style, stabbing the blade deep into the belly of his own family, in fact into his own troubled past, and into the knowledge of his father’s passionate participation in one of the blackest moments in human history. Günther’s design was awarded a Golden Lion award at the 2004 Venice Architecture Biennial. One author wrote, ‘Although commissioned for the most public of purposes, the Documentation Center conforms to Domenig’s quest for a personally meaningful language of forms to exorcise a painful legacy.’ 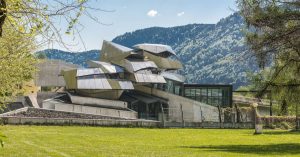 The other building included in the New York exhibit is Günther’s own ‘house,’ a dynamic geometric sculpture rendered mostly in metal, concrete, and glass overlooking Lake Ossiach near Austria’s border with Italy. The house, which looks to me like a sculptural nightmare, presents a menacing demeanor. This startlingly complex assemblage of forms and spaces brings to mind images of Nazi helmets, bunkers, and hatchet blades and seems embattled and aggressive at every turn. It was never meant to be lived in but was Günther’s pure expression of architecture; a place he said was for opera and meetings. He slept in a shack on the site during construction and never lived inside. 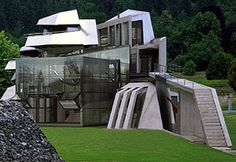 Steinhaus is built on a narrow parcel of inherited land. He spent his youth there during the Nazi and post-war period. After studying the rocky topography, Domenig began to explore ‘architectural smashings’ in a series of drawings that endeavor to capture the force of geometry, one of the themes in my book on Diagonality. The stark steel and concrete explosion of levitating bunker-like forms was a work in progress right up until Domenig’s death. Like Thomas Jefferson at Monticello, Günther continued to add to the composition as time and resources permitted. Curious, of course, is the architect’s use of the term architectural smashings. It is certainly not a term connoting charm, grace, repose, comfort, or peace, as Thomas Jefferson expressed those civilities. Smashings is an aggressive phrase that speaks of energy, collision, violence, and anger. There is a sense of cleavage about this architectural composition, of a mountain of rock exploding into sharp prismatic forms, splitting along psychic and geometric fault lines producing wedges and oblique planes in contrapuntal dialogue. The forms meet the ground in a stark manner without the softening effect of bushes or trees, much like a piece of sculpture sits starkly on a simple unadorned base. The building is defensive and yet oddly welcoming through a series of stairs and courtyard-like spaces formed between its juxtaposed wings. 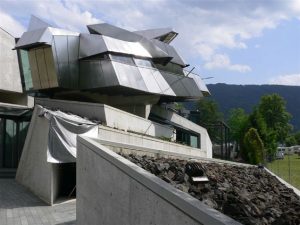 In the house proper there are ‘sleeping units’, a breakfast room, an office, toilets both in the house and in what Domenig calls the Black Hill, a structure made of concrete and faced with coal-like chunks of black stone. There is also a concert hall and a bomb shelter, which causes one to ask why a house in a remote rural area would require a bomb shelter unless the occupant felt threatened on some level that goes beyond the practical and the probable. Is there in this man an abiding sense of unwarranted guilt and abiding vulnerability and yet also an embrace of the peaceful and the compassionate? The combination of the bomb shelter and the opera hall brings to mind the Führerbunker in which Hitler listened to opera as he planned world dominance. Are the knife-edge corners of the Steinhaus a further expression of defense even though the history of defensive construction informs us that the acute angle is a more vulnerable architectural form than the obtuse angle? Or could those knife-edges reflect a subconscious offensive intent?

As if Steinhaus were not unsettling enough as a domestic environment in the eyes of someone used to conventional furnishings such as lamps, comfortable furniture, rugs and window coverings, Günther chooses to display a pterodactyl-like metal bird in the house that he originally designed in 1983 for a famous branch bank called Z in his hometown of Graz, but then decided to keep it for himself. Nix Nuz Nix is a sharply angular, frightening bird form with a long and pointed beak. Imagine being a sleepwalker staying the night at the Stone House and coming upon this metallic predator for the first time in the middle of the night. However, what truly jumped out in the photographs I saw are the sanitary facilities; they seem demonically industrial and downright scary. They brought to mind Nazi chambers for medical experiments and torture. 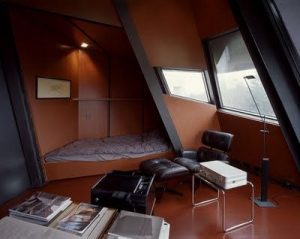 This talented, technically accomplished, ambitious architect, when viewed through the filter of his troubled past and in the light of his very inventive works is almost the stuff of fiction. Thom Mayne, of the world-renown architectural firm, Morphosis*, describes his friend, Günther, as ‘intensely private and reserved with a hypersensitive snout for the disingenuous, yet disarming in his emotional openness and vulnerability, with a habit of reaching out and touching the person to whom he is speaking. His work is ultimately about a…place where ruin is a source of renewal…’ Others have written about how Bruno Taut’s Alpine Architecture** influenced the work of Gunther Domenig.

I wish that I had met this talented, tormented soul before he died. His assistant wrote to me saying that Günther had been easy to work with but others found him very difficult to deal with. Sometimes genius, large or small, requires some latitude, particularly in the case of one man whose childhood simmered in a cauldron of unspeakable brutality and ethnic hatred. 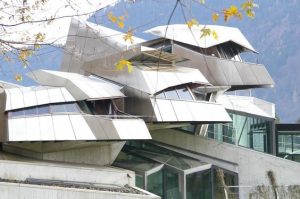 Domenig’s use of the diagonal motif is not an isolated event in time or place. His earliest project was the Habaschy Residence of 1958 built in the Ossiach Lake region of Austria where later Domenig would build his famous Steinhaus.

*The work of Thom Mayne and his firm Morphosis appears to have been deeply influenced by the work of his friend, Günther, and that work will also be profiled on this website.

**Bruno Taut will also be profiled on this website with further exploration into whether Alpine Architecture did influence Mr. Domenig.

Additional images of Domenig’s work can be found in Google Images and Pinterest.