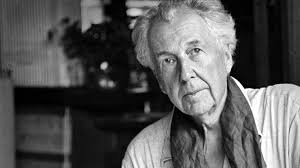 – This page is under construction –

There is no other architect in the world that has had a more profound and lasting impact on the emergence of Diagonality in the 20th century than Frank Lloyd Wright. From the start of his career to the end, Diagonality was a driving  and sustained force. There are several factors that influenced Wright’s engagement and experimentation with the Diagonal motif: these include The Froebel Toys; Victorian architecture; Japanese Art; the Octagon Fad; and Cubism.  Most impactful and the earliest influence was a gift from his mother, the Froebel Toys. 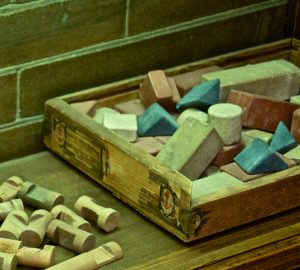 In the summer of 1876, Frank Lloyd Wright’s mother traveled to Philadelphia along with 10 million other visitors from the US and abroad to celebrate the 100th birthday of the signing of the Declaration of Independence at the Centennial Exposition in Fairmount Park. Wright’s mother, Anna, a progressive schoolteacher, was certain her 9-year old son, Frank, would become an architect. In the Friedrich Froebel Kindergarten exhibit, in the Education annex of the Woman’s Pavilion, she saw a Froebel Kindergarten Chest of toys (1838-1840) that included wooden blocks in varied geometric shapes and 12” square German papers intended for paper folding. The latter was an activity upon which Froebel, a German crystallographer-turned-educator, placed great educational value. Upon returning home, Mrs. Wright purchased a Froebel chest of toys. Wright later wrote of their influence in his development as an architect.  “For several years I sat at the little Kindergarten table-top…and played…with the cube, the sphere and the triangle—these smooth wooden maple blocks…All are in my fingers to this day…” Reportedly they influenced his design (and the interior decorations) for the Imperial Hotel in Tokyo and many projects before and after. 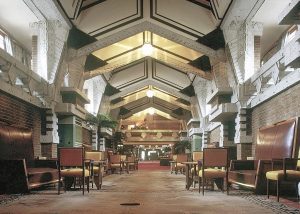 Froebel’s toys did not just involve blocks.  There was also weaving of straws and folding paper horizontally, vertically and diagonally. Having been a crystallographer, diagonal lines held special significance for Froebel. 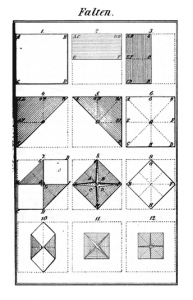 Given the fact that the Froebel blocks profoundly influenced Wright (he being a lifelong sponge of external influences), one wonders if the modern master had also been influenced by the intricate and complex angular geometry of cut glass, so popular during his youth. Although no hard evidence yet supports this notion, Wright’s possible inspiration by the prismatic geometry of cut glass would not be surprising. If alive today, however, he’d probably reject the suggestion because it would reference too directly his roots in asymmetrical Victorian design, which he later felt the need to disparage, no doubt to inflate (unnecessarily) his own originality. As time passed, however, Wright became a fountainhead of diagonality in his stained glass window designs, wall surface decoration, furniture, and the geometric organization of his floor plans, which are clearly crystalline in the geometric patterning and three dimensional massing and spatial organization of the spaces he created. Froebel’s influence on Wright and others was rooted in part in lattice building exercises, which had a demonstrably powerful affect on Wright as evidenced in the floor plan below…that is but one of many executed throughout his career. 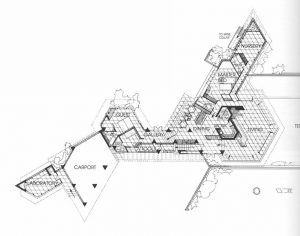 It is reasonable to assume that Wright and his mother would have read news reports about discoveries in the field of crystallography in the 19th century, given the fact that Froebel himself was a crystallographer and because Mrs. Wright became deeply involved with everything Froebel. One is therefore left to wonder whether Wright was influenced consciously or unconsciously by carefully examining the prismatic cuts in the decorative glass of that era. It is also reasonable to imagine that makers of cut glass were also influenced by the stream of reports about discoveries in crystal morphology that surfaced throughout the 19th century beginning in 1826 with Moritz Frankenheim’s Crystallonomiche Aufsätze in which he presents his discovery of thirty-two kinds of crystal shapes. Some of these geometries seem echoed in the patterns Wright saw in the designs of his mentor, Louis Sullivan. With this background it is understandable that Wright became a fountainhead of ideas and examples in the emergence of Diagonality throughout the following century.