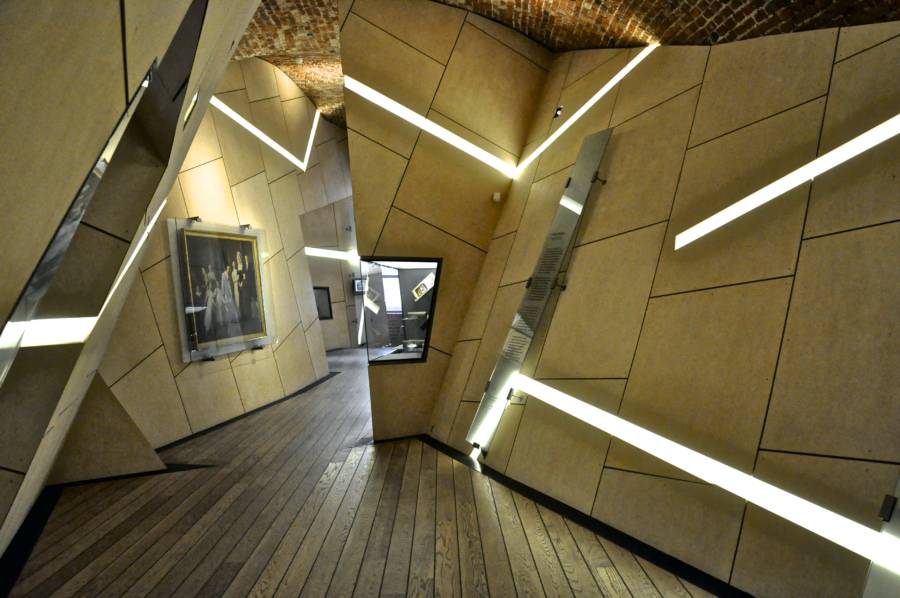 Daniel Libeskind originally rose to prominence because of his striking and highly honored, Jewish (History) Museum in Berlin. I’ve been told that visitors find the building an emotionally overwhelming experience.  Libeskind is a very talented, daring, and successful architect.  He was born in Postwar Poland, studied music in Israel, performed with great success, then turned to architecture, studying first at Cooper Union in NY then getting a postgraduate degree in History and Theory of Architecture at Essex University in England. 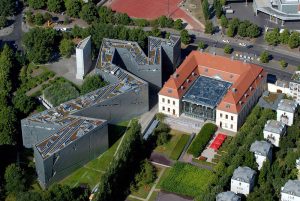 My interest in the Berlin museum, which I have yet to visit, is based on the extensive use of diagonal motifs.  In plan, the zigzagging museum looks something like the symbol of a lightning bolt and the resulting diagonal motif is repeated consistently throughout the building.  Based on photographs alone, (admittedly, not a great way to judge a building), I found the diagonal motif overdone and in many instances something of a superficial, unnecessarily unrelenting, architectural design element.  Nevertheless, it is a building that keeps calling you back through its conceptual intensity and architectural originality.  He won the commission through a hotly contested international competition.  His submission titled “Between the Lines,” consisted of drawings and text.  The radically diagonalized floor plan is amplified by diagonally oriented window slices, diagonally positioned structural members, and non-orthogonal interior spaces.  In short, the architecture is a tour de force.   Libeskind justifies the unusual architectural design through his history-based and poetic imagery.  Both are compelling but are they organically integrated such that the architectural designs grow out of what we architects call the program or the idea.  Or is it that that program grew out of the architecture, out of the architect’s desire to startle the visitor, to shock the visitor, to trouble and make the visitor both uncomfortable and dumbfounded? 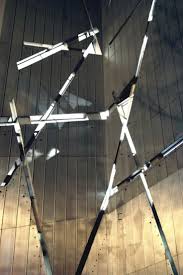 If on this project, the diagonal motif grew out of the program, then why is the diagonal motif used so consistently even though each of his museums have very different programs?  I have the sense as I look at his oeuvre through the decades that Libeskind is driven by a desire to shock the viewer leaving the impression that the architect is saying look at me, let me arrest you with my aggressive, startling designs.  This feeling about Libeskind’s work seems to be supported by his ruthless disregard for the existing buildings that he crashes into with his additions.  These additions are the opposite of humble; they seem mean-spirited and disrespectful disregarding the original architect’s effort to create a responsible work of architecture.  If he took this action in any one instance, perhaps it could be justified.  But every addition he designs slams into the original structure as if it was worthless and an inconvenient preexisting condition that Libeskind reluctantly had to accept while he at the same time dismisses it in a rather hurtful manner.  Is this an ego out of control?  Is this a deep-seated, anti-social violence at the core of the architect’s psyche?

I have remained interested in Libeskind’s architecture for many years.  He has been prolific with major projects executed all over the world.  However, what began to trouble me over time was that every project of his I saw published employed the diagonal as if he had forgotten the value of the right angle. This made me suspicious. Could it have been that the diagonal was so perfectly suited for every project he designed? The use of diagonals in his case seemed more like an adopted trademark style than a program-generated or site-generated design feature.

Every morning I receive an email from a company called ArchDaily that sends architectural news to thousands of architects worldwide. Yesterday, one of the featured projects was Reflections at Keppel Bay Towers, a two million square foot residential development that includes six high-rise towers and some low-rise housing prominently situated at the entrance to Singapore’s Keppel Harbor. It was designed by Daniel Libeskind who originally rose to prominence because of his striking and highly honored, Jewish (History) Museum in Berlin. I’ve been told that visitors find the building an emotionally overwhelming experience. Libeskind is a very talented, daring, and successful architect. He was born in Postwar Poland, studied music in Israel, performed with great success, then turned to architecture, studying first at Cooper Union in NY then getting a postgraduate degree in History and Theory of Architecture at Essex University in England. 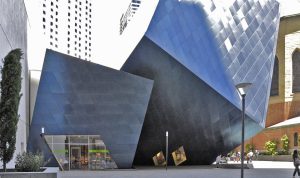 When I saw his Keppel Bay Towers yesterday morning, I had to laugh. The towers, although gray, look like an array of flaccid carrots of varying length stuck upside down into the green birthday cake of the surrounding landscape. From other angles the leaning towers look like a bunch of drunken sailors wearing birdcage caps of intersecting thin metal struts whose only function seems to be to bring each tower to a tapering, eye-catching point. To my eye, the metal cages look inane. This may sound like harsh criticism but you can find the project on the web and judge for yourself. While the complex is visually arresting, one can’t help but wonder whether, in the end, this is simply a search for form over substance.

One of the mantras at Penn in the mid-60s was “Form Follows Function,” a dictum that has its merits, but a design rule that certainly can be overdone. Even famous architects from that era, like Wright and Le Corbusier, who in one respect espoused functional architecture, were nonetheless always seeking expressive, unique, and artful architectural designs. Perhaps the curious nature of Libeskind’s project has a raison d’être in the marketplace of real estate. If one had to choose between a boring box and a design that is intoxicating from start to finish, one might go for the intoxication, no matter the cost of buying or renting a unit. This might bring joy and wealth to the developer who must be complimented for taking a giant risk with such an unconventional design. I do give credit to the Libeskind Studio for an enthralling poolside pavilion that is a little architectural gem.

When I was in San Francisco a few months ago, I saw a Libeskind-designed building firsthand (regrettably only the exterior because it was closed). The Contemporary Jewish Museum is a remodeling of the 1907 Jessie Street Power substation adjacent to the Yerba Buena Park and smack against the Four Seasons Hotel. Regrettably, the building was closed, so I could only photograph the exterior and peak in a few windows. The unmistakable tilted, dark-blue addition with an area of 63,000 square feet  is a fascinating piece of sculpture. Critical reaction to the project is edifying. Commentators from the Los Angeles Times and The Wall Street Journal lauded the work, including the comment, “a careful balance of explosive and well-behaved forms.” Both critics were relieved that Libeskind had abandoned his earlier sloping gallery walls for vertical walls. Unlike in his previous museums, it is much easier to hang art on a wall that is plumb. Edward Rothstein of the NY Times, however, was not so favorably disposed. He bemoaned the museum’s dedication to “multiple perspectives…without a grounding in knowledge, without history, detail, object and belief.” 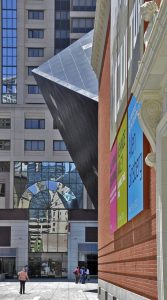 What troubles me about Libeskind’s work is that he has trademarked himself. He stamps his tilting forms on almost every project he designs and when he adds additions to existing building he hacks into them as if with a hatchet. This may be appropriate once in a while, but more often it seems to show a disregard for the work of other architects. It strikes me that he seems to feel unfazed about expressions of serious architecture executed in an earlier age as exemplified by his renovation and addition to the 135-year-old, Bundeswehr Military History Museum in Dresden, Germany. He mangled the staid integrity of the existing design by aggressively slamming his V-shaped metal addition into the original masonry classical structure. It looks like a giant missile head fell from the sky and slashed cleanly through the building like a knife through soft clay. Is this approach to the work of others unbridled narcissism, or is it inventive, daring design that I have trouble appreciating, save for the admittedly dramatic spaces created inside the museum?

As I photographed Daniel Libeskind’s Contemporary Jewish Museum in San Francisco, I had to wonder whether his building will be the only one left standing after the next earthquake hits northern California. Will it be jostled into a right-angle relationship to the earth, rendering it the only surviving building that then looks right, but not resulting from the architect’s original design? Or, will the titling crumbling buildings all around his museum look right, and his now foursquare building look wrong to today’s younger generation? 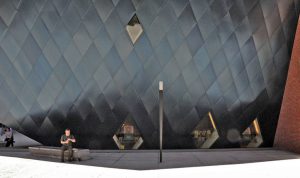 Another building I saw that Libeskind designed is the Danish Jewish Museum.  This was a very troubling experience.  All of the negative feelings I have about his work and a few of the positive feelings were on display. 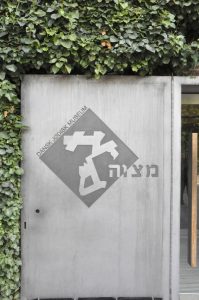 This museum space was built within an existing building, a former boathouse.

It is curious that a person (myself) so fascinated with diagonality for five decades would not enthusiastically embrace Libeskind’s use of the diagonal motif on every project.