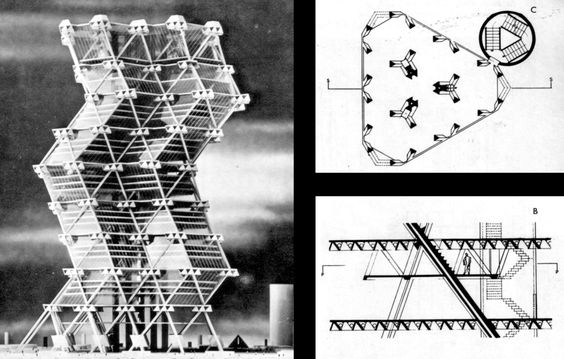 1943          Teen and Nursery Building in Why City Planning is Your Responsibility. Reportedly designed by Kahn’s partner Oscar Stonorov and described as having “explosive constructivist geometry.”

1947          Kahn becomes romantically involved with Anne Tyng who had a profound influence on the diagonal geometry of Kahn’s work.

1949          Kahn recommends that Bauhaus trained artist Joseph Albers come to Yale as a visiting critic, then take charge of the Department of Design.  Visiting critics such as R. Buckminster Fuller and Vincent Scully were influential in Kahn’s sense of geometry in architecture.  Kahn attends Yale architectural history professor Scully’s lectures.

1947-50    Kahn paints a mural in Weiss house that includes images of the Egyptian pyramids.  (see the chapter on this website dealing with Egypt – find it under THE BOOK)

1951-55     Kahn designs an addition to the Yale Art Gallery with a tetrahedron-based impure concrete space frame. It is not truly a space frame but a system with inclined T-beams that preserve the tetrahedral geometry that Kahn had to abandon due to forced compliance with the building code.  A triangular staircase echoes the geometry of the triangular ceiling coffers.  Although the Egyptian pyramids are square in plan, pyramidal forms were at the time buzzing through Kahn’s creative bloodstream  and found expression in his Addition to the Gallery.  Tyng regarded this project as a turning point in Kahn’s career and was aware of her role in that transition.

1951-54    The unbuilt Fruchter house with its three square wings arrayed around a triangular central space signals the coming of future floor plans that break with orthogonal geometry. The triangular disposition of the house’s three wings echoes the plan of the stair in the Yale Art Gallery addition.  A strange progression of spaces creates the entry experience, forcing occupants and visitors to walk awkwardly around a massive triangular chimney mass.  That mass presents itself as the central, forced focus of the design as well as an Kahn’s preoccupation with triangles at this time.

1956-58   In Kahn’s unbuilt Research Institute for Advanced Science in Baltimore, an array of five hexagons forms the geometric space planning core from which square pavilions fan out and interconnect, much like a diagram of interlocking molecules. Some of the square spaces lock in with a third square in a Y form with roughly triangular spaces uniting the trio.  Anne Tyng’s mindset seems evident here.

1959          The unbuilt Goldenberg house reveals a new geometric motif which is a triangular bit so to speak amid an otherwise orthogonal plan.  The angularity of this motif results from radial lines emanating from the square central space of the residence.

1965          In a letter, Fuller praises Tyng’s “superbly crafted and original scientific work which discloses her discovery of Golden-mean relationships between the whole family of Platonic solids.  These relationships, according to the records, have not been previously known to man…Anne Tyng has been Louis Kahn’s geometrical strategist.’

1969-73    The Inner Harbor Project in Baltimore (unbuilt) involves the introduction of elements rotated 45º to the otherwise orthogonal composition of this urban complex.

This section under development.