CHRISTOPHER DRESSER – A Victorian with a Modern Vision

CHRISTOPHER DRESSER – A Victorian with a Modern Vision 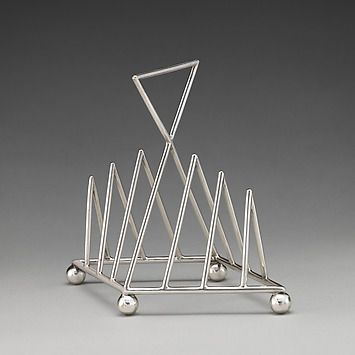 As seen through the “angular design” prism of the 20th and 21st centuries, the astoundingly talented—then forgotten—industrial designer Christopher Dresser was (and is once again) regarded as one of the towering design figures of the 19th-century. For those struggling during the Victorian age to find their way as designers and wanting to give form to an appropriate machine-age aesthetic, the geometric, minimal, abstract, and frequently angular forms produced by Dresser—especially after his visit to Japan when he was in his forties—were inspirational. 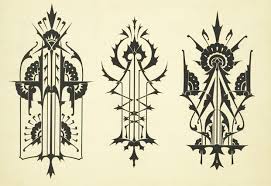 Christopher Dresser (1834-1904) was born in Glasgow, Scotland in 1834. In 1847, his parents enrolled him, at age 13, in the recently established Government School of Design at Somerset House in central London to study applied design and botany, his first love. He came under the influence of Owen Jones, an exceptional designer, and a noted design theorist. Christopher Dresser certainly followed Owen Jones’ advice to students, which in part stated: “…study whatever has gone before; not with the view of becoming a copyist, but with the object of gaining knowledge, and seeking out the general truths and broad principles…[so that] our works should be superior to those of our ancestors, inasmuch as we can look back upon a longer experience than they could.” His parents must have had intense faith in his potential to ship him off to London and to support his very prolonged training, which lasted for seven years, until 1854.”During Dresser’s formative years in the 1840s and 50s, the structure of the modern world was being [trans]formed…Scientific and industrial advances were becoming everyday events; this was the age of Brunel, Faraday, Stevenson, and Darwin, an age when it seemed as if science and technology could provide the solution to any need.” 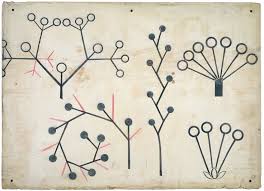 At first, Dresser based his design principles on the abstraction of plant forms, which is not surprising given his interest in botany from a very young age. Between 1859 and 1860, he produced three books on botany. During this period, Dresser saw himself primarily as a tradesman; designing, making, and selling things. However, in 1862, he published The Art of Decorative Design, and his place in the world of design changed dramatically. This book was the first of his many books on design that influenced countless designers, architects, and product designers around the world. His next book, Principles of Decorative Design, published in 1873, is regarded by some as his most important statement of his design principles. 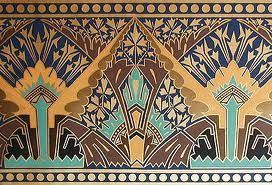 After Dresser got a doctorate from Jena University in Germany in 1850, he adopted the title of “Doctor.” This action was not the first of several self-aggrandizing steps he took during his lifetime. To probably everyone else but himself, there was no need for him to proclaim, inflate, or embellish his accomplishments; he was always energetic and highly accomplished. He was also an inspiring teacher and lecturer. It has been said that he almost single-handily invented the new profession of industrial design. “He was among the first product designers fully to understand and embrace mass production and to acknowledge the importance of the machine in raising standards of beauty and design for a mass market.” Dresser worked for a vast number of companies including Jackson & Graham, Wedgwood, Minton, Green and Nephew, Coalbrookdale, Benham & Froud, Perry & Co., Linthorpe Art Pottery, and William Ault & Co. 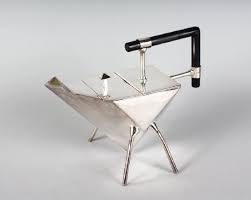 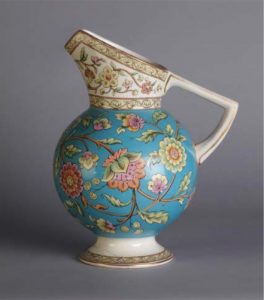 Dresser’s stylized and eclectic approach was based on “…an abstract and reinterpretation of historic patterns and natural forms rather than direct transcriptions.” He also promoted a form of “international eclecticism.” Dresser introduced Japonism to the west and was the first designer to visit Japan, which he did in 1876-7. That trip westward took him first across the United States in 1876 with a stop in Philadelphia to check out the Centennial Exhibition in Philadelphia’s Fairmount Park, an exhibition that, like others in Europe, set a new course in a rapidly-changing world. Upon his return from Japan, his work took a new direction. “Japan taught him that often form is enough to entertain and please the eye; that ornament can distract from rather than enhance form.” His household products were truly modern, diagonalized and imbued with both angular energy and exquisitely understated elegance. 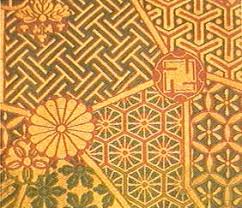 When, in 1937, the distinguished German-born English Architectural historian Nikolaus Pevsner championed Dresser’s work in an article in the British journal Architectural Review, it was still some time before museum curators acknowledged his importance. And yet museum curators were not the people that discovered the value in Dresser’s work; it was dealers and private collectors who “recognized his remarkably modern spirit and radical approach. It was they who collected and preserved his work.” To this day, the best collections of Dresser’s output remain in private hands in Europe and America. The first exhibition devoted to Dresser was held in 1972 at the Fine Arts Society in London. Now his work is judged to be on a par with his then more famous contemporary William Morris. 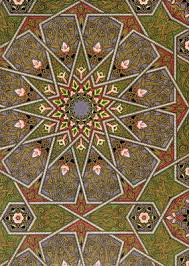 Throughout his career, this trailblazing and prolific designer endeavored to develop a language of design based not on literal representation but on a kind of botanical abstraction. Dresser’s creations and his ideas on ornament, pattern, and decoration influenced many American architects. These include Philadelphia’s Frank Furness, Chicago’s Louis Sullivan, and west coast brother-architects Charles Sumner Green and Henry Mather Green. Most profoundly, it impacted another irrepressible lover of Japanese art and architecture, Frank Lloyd Wright, a man who refused to credit anyone or any group for influencing his great works. 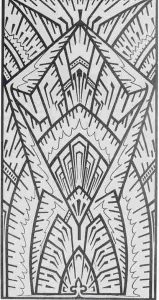 When I first saw this 1873 drawing by Dresser, I was certain I had stumbled upon an artist who captured the sense of energy manifest in the latter part of the 19th century. The diagonal gestures, I was sure, must have influenced the geometry of the 20th century. Here were wing-like forms that suggested flight, aspiration, and explosive power. 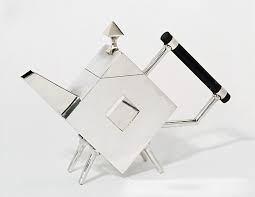 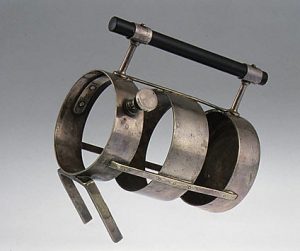 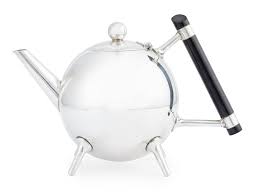 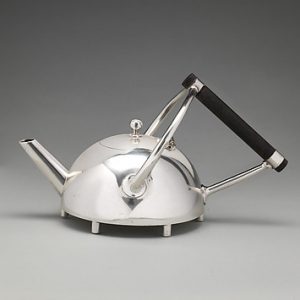 What is obvious about the three teapots and the wine-bottle holder pictured here is Dresser’s clear affection for, perhaps even obsession with diagonality. The legs of three of the items don’t just splay at an angle. They proclaim an angularity that is impassioned. The ebonized wood handles assert a daring diagonal motif that makes clear that Dresser was smitten with the unconventional, with a search for a fresh vocabulary for a dawning new age. The upper teapot rotates the square, which is a hallmark and distinguishing feature of 20th-century diagonality. Even the top is pyramidal including its finial. The legs of the wine bottle holder do not come down perpendicular to the tabletop; they assert an almost aggressive animal stance. These angled features are not by chance. They represent the aesthetic predilection of a designer who anticipated what would emerge in future decades. 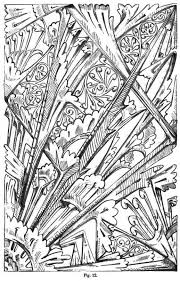 Noteworthy also is the departure from symmetry (mirror imaging), a telling feature of 20th-century art and architecture. Here is organic energy reaching in multiple directions like that of Cubist art. Evident also is interpenetration and a clash of geometries that would warm the heart of any Japanese woodblock artist. 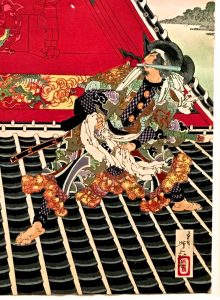 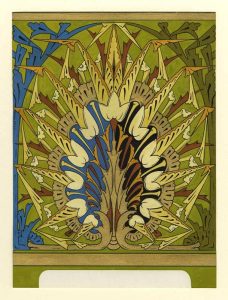 The Crab Tree Farm (Illinois, USA) editor wrote in an article that appeared in 2015, “Although in his textiles and other two-dimensional works, Dresser was a prolific and original creator of ornament, in the present collection, decoration plays a secondary role to shape. The protomodern aesthetic of Dresser’s tableware and the adventurous treatments of his cross-cultural ceramics reveal the particular elements of Dresser’s eye and mind that appeal so much to our contemporary tastes.” Diagonality is not evident in all of Dresser’s sketches and actual works, but the impulse is there and that is what is relevant as we look back on the sources of Diagonality in the modern era. 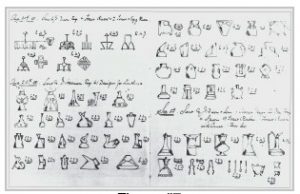 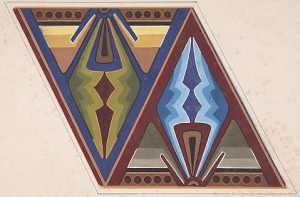 It is likely that Christopher Dresser never used the word diagonality, but it pulses through his work with compelling vitality. Diagonality is a motif that was just surfacing during Dresser’s later years. Consider the following quote from Wikipedia: “Élan vital is a term coined by French philosopher Henri Bergson in his 1907 book Creative Evolution, in which he addresses the question of self-organisation and spontaneous morphogenesis of things in an increasingly complex manner.” Here is where Dr. Dresser melds his interest in biology with his worldly-influenced sense of design. 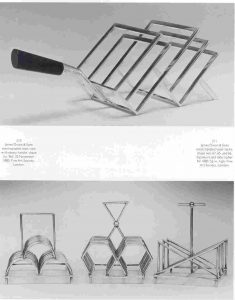 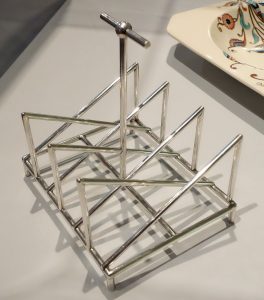 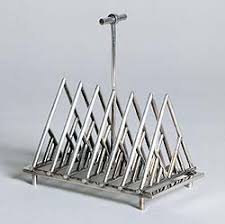 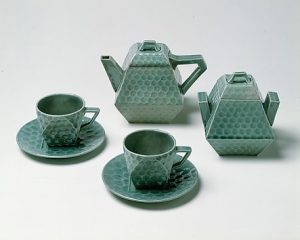 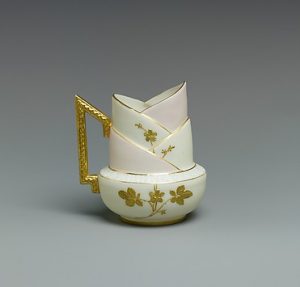 So here we pay tribute to Christopher Dresser, an industrial designer who was decades before his time and whose visionary designs, for a sad interval, were lost in obscurity.  This view is substantiated by Martin Levy of H. Blairman & Sons Ltd. He writes in his “note” titled Christopher Dresser: a Victorian designer: “Dresser has now also been the subject of numerous monographic exhibitions, starting with ‘Christopher Dresser’, mounted by Richard Dennis, John Jesse and the Fine Art Society in 1972. This was followed by the first non-commercial exhibition ‘Christopher Dresser 1834-1904’ at the Camden Arts Centre in 1979.  In 2002, ‘Christopher Dresser and Japan’ toured four Japanese museums, taking his work back to a country that he had visited, and which had been a considerable source of inspiration.  More recently the Cooper Hewitt, New York and Victoria and Albert Museum mounted ‘Shock of the Old: Christopher Dresser’s Design Revolution’ (2004), an authoritative appraisal of the designer’s work. Dresser’s production in many media – ceramics, furniture, glass, metal work (silver, electroplate, painted tin and cast iron), textiles and wallpapers – is today represented in collections across the globe.  There is now no question about Dr. Christopher Dresser’s internationally accepted reputation as the leading ‘Viktoiranischer Designer’, the title of the 1980 monographic exhibition mounted at the Kunstgewerbemuseum, Cologne.” 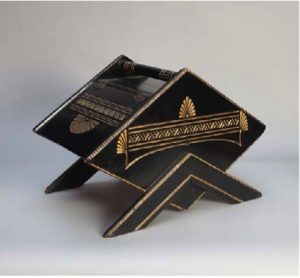 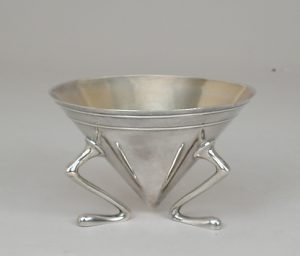 Above quotes, unless otherwise noted, are from:

Permission rights for reproductions in progress.