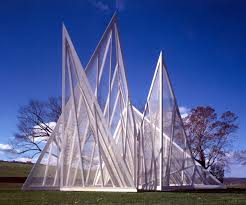 When I was a student of architecture at the University of Pennsylvania (1957-1963), our class visited architect Philip Johnson in his offices in New York.  Diagonality in architecture was becoming a frequently used motif, although the term diagonality was not in common use.  Johnson joked about us coming from Philadelphia where Anne Tyng and Lou Kahn’s zig-zagging City Tower had become a cause célèbre, a startling innovative, triangulated approach to constructing tall buildings. As part of his jocular expression, Johnson leaned this way and that with a smile on his face indicating he was getting a kick out of pantomiming City Tower.

Throughout his career, Johnson went on to design many buildings using the diagonal motif. A 30-foot high pavilion he designed with partner Alan Ritchie is worth noting. It was designed sometime before October 2000 when it was featured in an issue of Architectural Digest. Described as an architectural folly (or folie as the owners prefer it spelled), the pavilion consists of four steeply sloping, closely packed, spearhead-shaped enclosures leaning in different directions. The triangular forms, looking much like whimsical cages, are made of steel frames with white painted chain-link fencing defining the flat triangular planes. The ensemble of interpenetrating forms sets dramatically next to a tree-lined pond on a manicured lawn in the gardens of a house in Westchester County, New York. The Architectural Digest’s writer suggests its essence is “Pleasure rather than purpose, fun rather than function…” 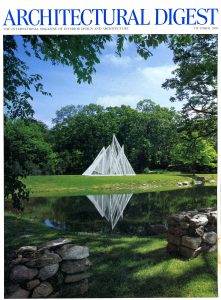 Johnson was about 94 when he designed this striking project which is positioned “before a backdrop of majestic woodland and facing an infinite vista of rolling fields…” Intermediate supports required to prevent the chainlink fabric from sagging are positioned at angles to the corner columns thereby further advancing the diagonal motif.  The folie can be seen from the house that Richard Meier created for the owners, which is off at a distance.

The article in Architectural Digest  states that one of the firm’s current projects is a glass and steel addition to the Chrysler building that will be seventy feet high and will house a restaurant.  Reviewing Philip Johnson’s work in general over a span of many decades, it becomes obvious how central the theme of Diagonality was to his architectural creations and how perfectly suited it has been to his irreverent, jaunty, theatrical and sometimes spiky nature.

Awaiting permission rights for the photos.