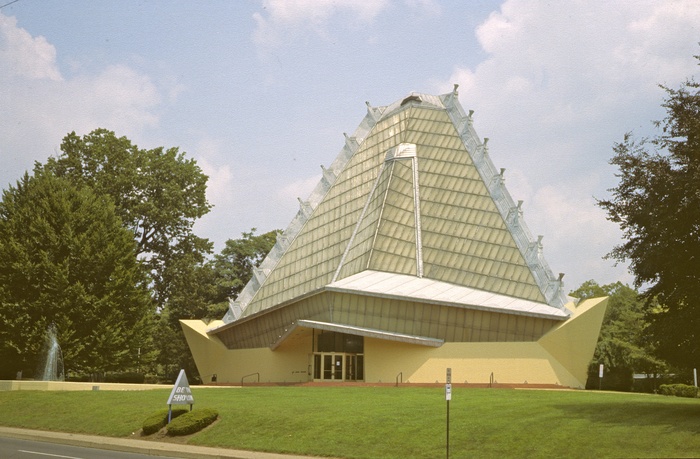 In 1876, Frank Lloyd Wright’s mother attended the Centennial Exposition in Philadelphia and visited the Kindergarten exhibit where she saw a Froebel Kindergarten Chest of Toys.[1]­,[2] Mrs. Wright was certain her 9-year old son, Frank,[3] would one day become an architect, so she later purchased[4] a Froebel Chest that included wooden blocks in varied geometric shapes, and a set of toothpicks and peas[5] that invited children to assemble 3-dimensional structures.[6] Decades later, Wright said that he had played with the cube, the sphere, and the triangle stating that “All are in my fingers to this day…” Throughout his career, Wright used various geometric motifs, but the diagonal, arguably, had the greatest impact on other architects during his lifetime and after.[7] A building project symbolic of Wright’s lifelong engagement with the diagonal is Beth Shalom synagogue outside of Philadelphia [fig.1].[8] 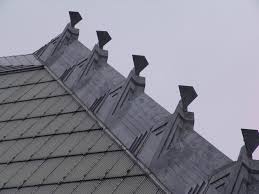 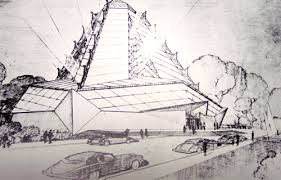 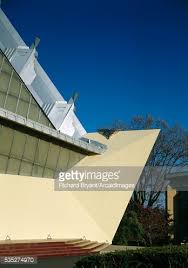 The design of Beth Shalom is based on one of Wright’s unbuilt earlier schemes called the Steel Cathedral.[11] Author Joseph M. Siry notes “…the crystalline metaphor had been a favorite motif of the German expressionists, whose projects of the 1920s may have inspired both the Steel Cathedral and Beth Shalom.”[12]

[2] The Centennial Exposition commemorated the 100th birthday of the signing of the Declaration of Independence. Ten million visitors travelled to the event that summer from the U.S. and abroad. Eight American glass manufacturers exhibited their products at the Exhibition, marking the start of the very popular Brilliant period in cut glass manufacturing. Complex geometrical incisions characterize this era of cut glass.

[5] The peas would be soaked in water to soften them adequately to receive the toothpicks.

[7] One noteworthy example is U.S. architect, Bruce Goff, whose work is mentioned and illustrated later in this note.

[9] An inner layer of blue plastic had been planned but was not executed.

[10] One can imagine this arrangement made from moist peas and tooth picks on Wright’s Froebel kindergarten table. 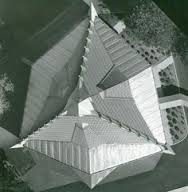 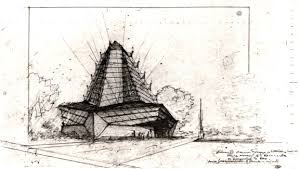