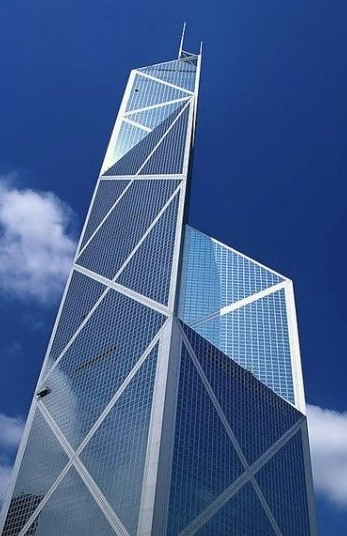 The Bank of China is an exemplary manifestation of Diagonality executed in the second half of the Twentieth century.  It was designed by the United States master of architectural geometry, I. M. Pei about the time that his East Wing of the National Gallery of Art was under construction in Washington, DC.  While the East Wing utilized diagonality in plan and massing but not in elevation, the Bank of China utilized diagonality in the vertical unfolding of the crisp planes that shape the massing of the building as it rises 70 stories in the heart of Hong Kong. 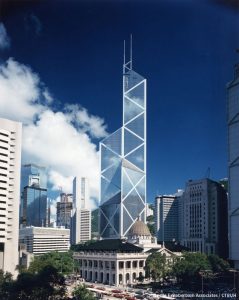 With the Bank of China project, Pei starts with a square building footprint. This geometrically pure and elemental shape is then crossed by two diagonals forming four triangle-shaped quadrants. If the building had risen as an uninterrupted square prism, those diagonals could have represented the main beams for the full height of the building.  But importantly, because the triangle quadrants are progressively shed as the building rises off its square base, real world physicality then forces the pure Euclidian geometry of the framing scheme to be distorted, resulting in internal framing asymmetries as illustrated below in a diagram that appeared in the September 1985 issue of the professional journal Architectural Record.

Although the plane of the zig-zagging reflective glass curtain wall deliberately aligns with the pure geometry of the square and with the not-square shapes of the upper floors, the position of the steel framing and the disposition of the concrete and steel columns that receive the steel beams shift alignment producing an interesting asymmetry that is not evident on the building exterior; in fact, the asymmetry is concealed.  It is somewhat like the way the generally symmetrical exterior of any organism that moves in space (such as a human body) does not reflect the asymmetry of organs falling inside the body. The building’s crisp and simple form belies the eccentricities in the structural design.  The shape and position of the concrete and steel columns change as they move down through the building, much as the bones of a creature change shape and position as they respond to the complex forces imposed from within and without.  In addition to responding to the need to respect the pure geometry of the building, the structure also had to be designed to cope with horizontal wind forces twice that of New York and earthquake load four times those experienced in San Francisco. 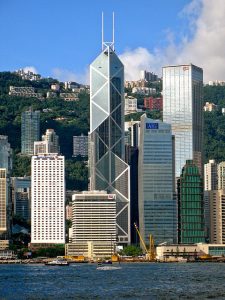 The diagonal motif of the plan is echoed in the diagonal structural bracing that crisscrosses up each facade from the sixth level to the pinnacle.  Likewise, the sloping glass roof planes that terminate each of the four quadrants are also triangles.

It is interesting that horizontal structural elements are missing from the facade where each diagonal brace intersects the perimeter columns.  This triangulation would give the building greater wind resistance and strength against the wracking of the tower in the powerful typhoons that plague this part of the world.  The back story regarding the missing horizontal members is that they are not missing at all.  They are there but concealed behind the glazing.  Why?  The external expression of the horizontals were part of Pei’s original design and part of the innovative structural design, but the Bank of China objected to them because the building would look like “a ladder of X’s” and the X happens to be in Chinese iconography a symbol of negativity. 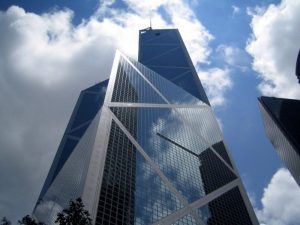 Any hint of a negative “cash balance” would be anathema to a banking institution, so Pei presented the design to the powers to be as a tower of diamonds, a symbol suggesting prosperity and endurance — much more palatable to the mindset of the client.  From a purely graphic sense, this accommodation to Chinese symbolism empowers the design for observers who are not structural purists. 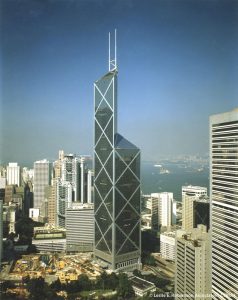 Quoting from the references article in the Architectural Record, “The expression of lateral bracing on the facade is essential to the building aesthetic.  Regarded by many architects as undesirable, [that may have been the case in 1985, but no longer JL] the use of diagonal bracing and its graphic expression is considered by Pei as a natural way to build. Specifically referring to the Bank of China’s outward appearance, Pei stated, ‘Form and decoration were not enough.  The building must be structurally logical and elegant.’  And so it is.  The bracing structure is expressed with an aluminum architectural cover that is flush with the plane of the facade and directly related in position and dimensions to the diagonal structural members.  The corners of the reflective glass-and-aluminum curtain wall have also been sheathed with an aluminum cover. Though the corners’ articulation marks the location of major columns, it does not always express the full dimension of those columns — an instance where the formal intentions of the architect demanded something other than a prosaic description of structural elements. The overall result of the façade’s handling is a crisp surface that appears tightly drawn across the faceted faces of the building. 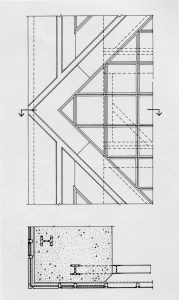 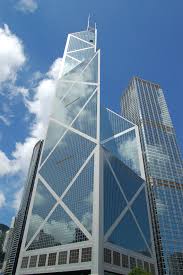 The building has an aspiring dynamism resulting from the diagonals zig-zagging up the height of the tower. The stacked squares that would have resulted from the expression of the horizontal structural members would have produced a more static imagery as the image below begins to suggest. 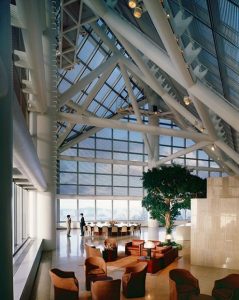 Bank of China by Pei Cobb Freed and Partners 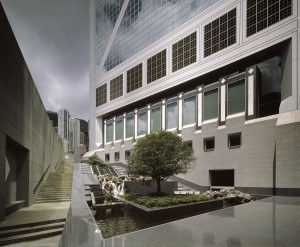 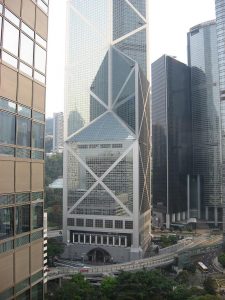 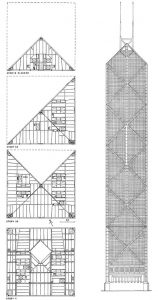 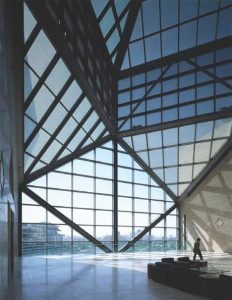 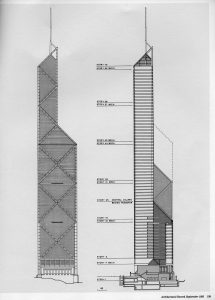